Crystal Jacqueline / The Honey Pot — We Fill in Forms and Mow the Lawns
(Fruits de Mer Friends of the Fish 25, 2018, LP) 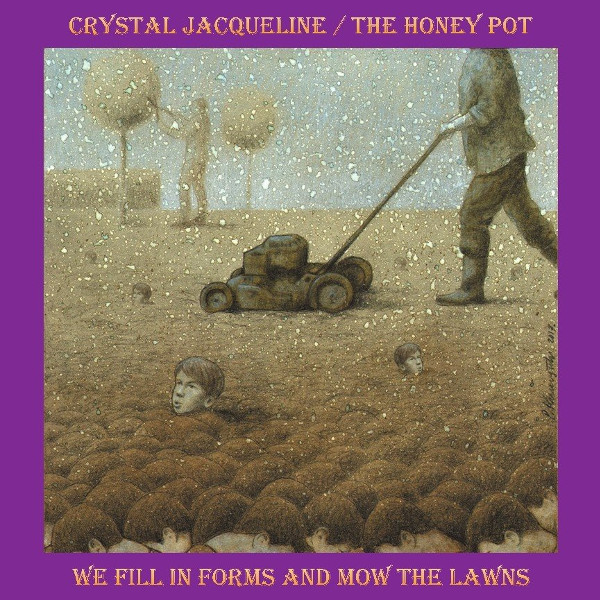 Let's start with the cover art. This beautiful painting looks like a hybrid of surreal artist Gervasio Gallardo, Betty Swanick (Selling England by the Pound), and Paul Whitehead (Nursery Cryme, Trespass, Foxtrot, et. al.), and it sets the stage for the nine modern psych tunes from Crystal Jacqueline, Icarus Peel, and The Honey Pot. Many of the songs are cover tunes that have appeared on a variety of Fruits de Mer releases over the years. The album kicks off with “I Just Gotta Know My Mind” from FdM’s flexidisc set Postcards from the Deep. This fuzzed-out 60s pop psych tune has been remixed and remastered for the album, plus the sound quality is enhanced. The next is a delicate dreamy cover of Pink Floyd’s “Remember a Day” complete with Crystal’s beautiful vocal harmonies and Icarus Peel’s inspired guitar break. Then we have Icarus Peel’s blissed out instrumental cover of “The Avengers Theme,” which also previously appeared in a shortened version on Postcards from the Deep. Back in 2013 when FdM put together a Hollies tribute ablum, The Honey Pot submitted their cover of “Step Inside,” but it was politely rejected. Now we can all listen The Honey Pot’s trippy cover with Crystal Jacqueline’s background vocals. One of the high points on the album, an out take from the Ascending Scales sessions, is their cover of The Verve’s “The Drugs Don’t Work,” a beautifully mournful duet where you can feel the exquisite pain of the two lovers. Side Two starts with the original tune “Games for May” with Icarus Peel on his new Stratocaster channelling Jimi Hendrix. Next is Crystal’s cover of “A Fairy Tale” that had previously appeared in a shortened version on her FdM “A Fairy Tale” EP. Then there is the remastered “Moonsong: Pelog” from Crystal’s Morning Dew EP. And the album closes with the outstanding lysergic cover of Mighty Baby’s “Egyptian Tomb,” complete with sitar, brass, sax, organ, and Icarus’ wah-wah guitar. If you have yet to experience the music of Cyrstal, Icarus, and The Honey Pot, then We Fill in Forms and Mow the Lawns is a fantastic place to start.

Salvation - 1st & Gypsy Carnival Caravan – Among the mainstays of the West coast psychedelic scene in the mid- to late-60s was a jamming unit with a slight country flavor originally called The New Salvation Army Banned. Eventually a certain...  (2010) » Read more