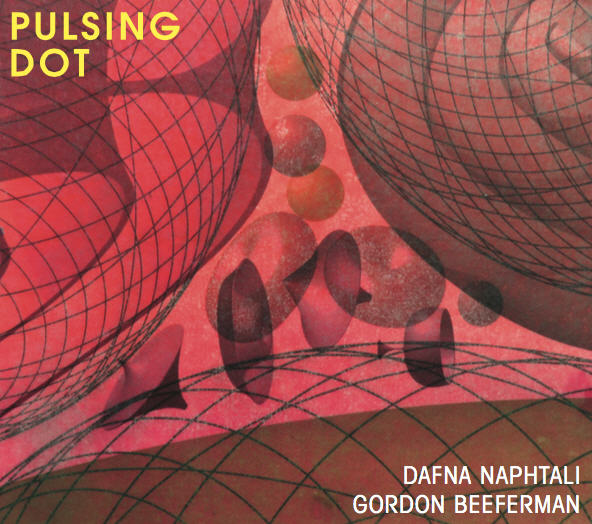 Gordon Beeferman is a keyboard player, and one I was familiar with from his excellent ensemble release Four Parts Five released on Innova a few years ago, a four part work composed by Beeferman by a five-piece group doing something akin to math-jazz. He’s had his hands in a lot of other musical projects throughout the years as well, from jazz ensembles to theater works and so on. Other than a collaboration with Kitty Brazelton from around 15 years ago (which I remember little about), this is my first exposure to Dafna Naphtali, although she has been hard at work as a composer singer, multi-instrumentalist, and electronic musician on the jazz / avant / experimental / electro-acoustic music circuit for a good twenty years. Pulsing Dot is their first recorded collaboration as a duo, essentially five free improvisations with Beeferman on piano and Naphtali doing mostly wordless vocalizations and creating electronic effects and unusual percussive sounds (electronically), and processing the sampled sounds from voice and piano in various ways on the computer, creating an unusual and occasionally chaotic collision of acoustic and electronic sounds. With her amazing voice she is also capable of diplophonic techniques, which she uses occasionally here (think of the late singer Demetrio Stratos of the Italian jazz-rock band Area, who was well known for that technique). Some of the material here is pretty far out, and hard to wrap one's ears around in an everyday muscal listening situation, although the piano provides a path to follow. That said, if one listens closely to all of what’s going on herein (headphones, please), every moment is genuinely interesting and the live interaction between the collaborators makes for some truly groundbreaking improvisation.