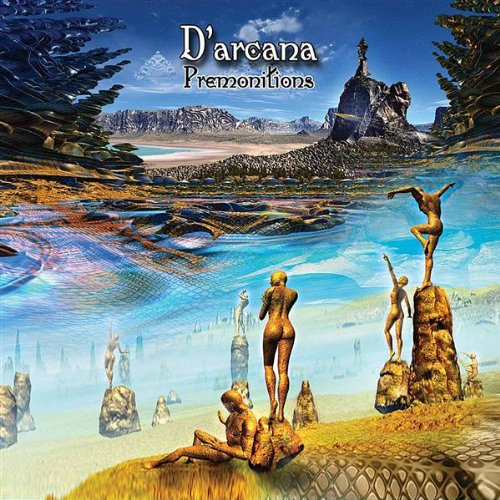 The sprawling two-disc set at hand is D'arcana's third release, nearly two hours of ambitious studio recordings squarely in the modern progressive rock vein. This northern California trio is strong on melody, driven by acoustic and electric guitars, bass, drums, keys and multi-part vocal harmonies that, all taken, have a decidedly West Coast feel blended with psychedelic touches, though there are surprises at every turn. D'arcana's primary composer and de-facto leader is multi-instrumentalist Jay Tausig, who some may be familiar with from several space rock projects (Solid Space, E-Motive), or from his contributions to tribute discs. Rounding out the trio are bassist Shelby Snow and guitarist James Camblin, who doubles on synth and contributes some sweet pedal steel playing throughout, giving their sound a unique character. A guest violinist appears on a couple numbers. Lead vocals are provided by Tausig, but all three members contribute harmonies. There are plenty of nods to classic prog (influences seem to be Gentle Giant, classic Yes, Peter Hammill, perhaps Anthony Phillips era Genesis), but there's no mistaking that this is a band of the 21st century, especially given the clean production values and wise avoidance of too many 'vintage' sounds. Central to this set is the 42 minute split title track, opening disc one and closing disc two, though the travels in between provide plenty of interesting stops as well, and give the set a strong sense of variety. Premonitions is a superb release that most readers should find much to their liking.

Thumbscrew Live in Black and White