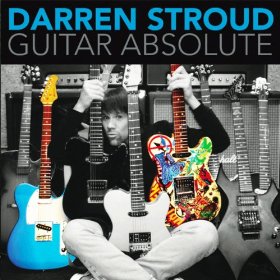 On Guitar Absolute Darren Stroud plays all guitars and plays bass on most tracks. Tones range from warm, clean jazzy tones to more distorted offerings. Stroud presents a balanced sense of structure in his compositions. The first track, “Trip”, is his most distinctive track and features an awesome and melodically complex solo. On “Cool Cat Daddy” he lets his jazz hair down. However, his rock chops far outshine his jazz chops. Stroud’s jazz lines lack an experience and confidence akin to his rock playing. “Lickity Split” is a bluegrass influenced ditty with Darren soloing on dobro. This track is technically impressive, but feel-wise a bit stiff. There is a definite Satriani influence, especially on “Cup of Joe” (that one’s real obvious) and “Disturbed”. A feeling of youthful expediency and energy permeates much of the CD. Stroud at times plays some very amazing things; however, he doesn’t often encase those wonderful things within a statement that lets the listener digest it fully. A track where he accomplishes this is on “Dancing With Chains”, a bluesy ballad where he takes his time and develops the mood and feel of the song. For a rock guitar gun-slinger, composition is the actual defining point. Should be interesting to see Stroud develop further.