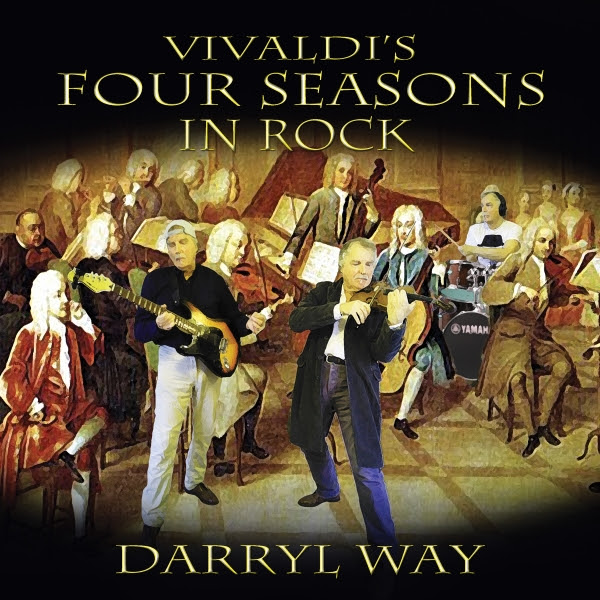 It’s been almost fifty years since Curved Air hit the music scene with their first album Airconditioning, and closing the first side of that album was the seven and a half minute classical-rock meets psychedelic violin freakout titled “Vivaldi,” composed by Darryl Way, recapped again at the end of side two with synthesizers and explosions (“Vivaldi with Cannons”), again on the band’s third album as the purely synthetic “Ultra Vivaldi,” and presented again on several live albums over all the years since. Yes, it was an original, but definitely inspired by parts of Antonio Vivaldi’s original and best known work from the 1720s. With the 50th anniverary of that interpretation fast approaching, Darryl Way has set out to set the record straight and do a rock interpretation of all four parts of Vivaldi’s influential masterpiece, attempting in his reinterpretation to maintain the original concept, tell the same story, and maintain the tone, feeling, and emotion closer to the composer’s original intent. Way’s main instrument is of course violin (which he has applied numerous overdubs here), but over the years he has mastered numerous other instruments, so a complete do-it-yorself project like this is just a matter of playing all of the different parts to make it more ‘rock’ (electric bass, electric guitar, drums, percussion, synthesizers, and so on). In preparation for this review I’ve listened to this numerous times, often playing just one section back to back with a fully orchestrated version for comparison, and it seems Way has nailed it, staying pretty much true to all the notes in the original, and the layers and layers of strings (as well as synths) applied are in fact evoking the same feeling as the orchestra would, adding the rock power only at the points where the original would have benefited from the same. There are some movements where a steady percussive beat reminds the listener that this is not the original, but it’s all done so tastefully and appropriately that one can’t fault it anywhere for the interpretation and arrangements. Indeed, you cannot improve upon perfection, but if you've ever sat in a concert hall in amazement while the piece has been performed by a full orchestra, there’s a good chance that you’re going to like this.

Create - From Earth to Mars – Why is it, that outside the realm of EM-admirers, few people, even people who do like EM, don’t like Klaus Schulze’s music? The answer lies in its static structure, where other artists...  (2006) » Read more