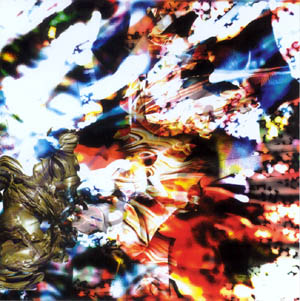 One of the most prolific and highly-sought drummers in avant-prog, Dave Kerman, has returned with an album from his own project 5uu’s. Abandonship features the most stripped-down line-up to date, with Kerman on all instruments, Deborah Perry on vocals, and Udi Koomran credited with “sound.” Much as with other 5uu’s work the keyboards often lead with lengthy, sinuous melodic lines which stretch the boundaries of tonality, if they respect them at all. Kerman has an ingenious ability to layer contrapuntal lines which are dissonant yet bizarrely infectious; imagine Webern starting a rock band and knowing how to write for the idiom. Perry has her finest vocal outing yet (at least in the Thinking Plague / 5uu’s catalogs), delivering the difficult and unintuitive vocal melodies with an alternating detached irony and alien invocation comparable to some of Dagmar Krause’s finest work. As enjoyable as these vocals are, it is the compositional genius that will most command repeat listens; the crescendos into a percussion-driven sensory assault with multiple layered parts and effects combed into a thick aural mesh that honestly is beyond my qualifications to do justice. Very little music has the power and majesty of the final couple of minutes in “Noah’s Flame”; brief moments of peak inspiration. As always the production is meticulous, and the studio is used as another instrument to manipulate these art songs into otherworldly musical experiences. I have not been so moved by Kerman’s work since the monumental Hunger’s Teeth; it is exhilarating, if rare, to hear rock music so categorically successful.

Do you ever wish you could indulge in some honest, healthy, head-banging and rocking out but just can¹t bring yourself to put on any Led Zeppelin or AC/DC? Well your time has come, RIO-freaks. Kerman and company (Deborah Perry on vocals and Udi Koomran on “sound”) have put together some of the most challenging music around, rivaling their peers for sheer oddity and quirkiness, but what comes across is Kerman¹s sheer power and command behind drums and percussion. They sprinkle down over more placid stretches and thunder like nobody¹s business during rock passages. And of course, being RIO, you get it all together in the same song. Sure the material lacks the instrumental dexterity and prowess of a Miriodor or Thinking Plague though this is more than offset by the rhythmic brilliance and sheer rocking power. Such a full sound is unusual from a lineup like this, especially considering the only "musician" is primarily a drummer! Kerman is assisted by liberal use of midi instruments, allowing him to link drums to keys (and vice versa) without having to record the two individually. Koomran¹s contributions are more difficult to decipher, though the disc is laden with recorded sounds pulled from street vendors, nature, and television, among others. Perry’s vocals are charming as ever and suit Kerman¹s poetry well. Roger Trigaux even makes a guest appearance as “the dictator,” perhaps hinting that Kerman¹s appearance on the next Present disc is assured. This is an easy recommendation for fans of the Present / Thinking Plague axis of RIO.

Dave Kerman is making a concerted stab to become the Christian Vander of the Cuneiform banner of groups. Not only is he doubling up between his percussion responsibilities with Present and Thinking Plague, but also he has found time to relocate to Israel and record a new album under his own name. Dave made this 5uu's project true to his heart as a solo album with guest, which suits his mood but he still manages to retain an overall group sound. The introduction piece, "Yordei Hasira #2," is a slice of Material-like syncopation with wobbly bass and odd percussion that sets the experimental tone of the ten tracks. Probably the best track is "Thoroughly Modern Attila," where the sound mix (courtesy of Udi Koomran) is especially crisp and emphasizes a brutal bass and drum pairing. I am also very pleased with Dave's compact approach to guitar playing (as well as his leads) which really pays off when paired with piano unison on "Noah's Flame." Back again for another unnerving ordeal is Deborah Perry on "Couple #3 Is a Solo" and "Belly-Up" which serves up the oddest vocal modulation I've ever encountered: the piece is like Henry Cow meeting Universe Zero circa 1975. Kerman goes into great detail about the construction process in the liner notes that is both informative and amusing. Being a US citizen in an unfriendly part of the world has certainly spurred the creative process for the accomplished drummer. Now if we could just see him stateside more often, I'd be truly happy.

Iva Bittová - Ne Nehledej – Iva is a Czech violinist/vocalist who worked with drummer Pavel Fajt on two stupendous albums (Bittova & Fajt and Svatba) before going it alone. This is her third solo work. (Caution: on her first...  (1996) » Read more

Out of Focus - Rat Roads – This is my first encounter with this classic German group, so knowing that the tracks are outtakes from their 1972 sessions for the album Four Letter Monday Afternoon didn’t tell me much. As the...  (2003) » Read more

Vidna Obmana - Twilight of Perception – Belgian composer Vidna Obmana has been on the Fourth World electronic scene for quite a few years now, using electronics, percussion, tape loops, and processing to produce music with a rich, dark,...  (1997) » Read more