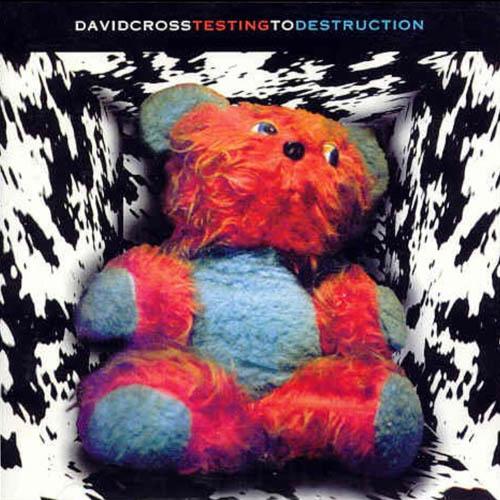 This album is the answer to the question, "Whatever happened to that guy who used to play violin in King Crimson?" Don't get your hopes up, though, Larks' Tongues it ain't. I really hated this album upon first listening. Further listens revealed redeeming qualities, still, there are intensely unlikable moments which may have you reaching for the "Skip" button. Testing for Destruction is somewhat closer in style to UK than King Crimson. But while bassist John Dillon is a dead ringer for John Wetton vocally, it's clear that Cross is no Eddie Jobson. Neither is keyboardist Sheila Maloney, but she is a talented player in her own right — not of Jobson's calibre, but certainly one of the more aurally pleasing aspects of what's offered (though the off-key synth-squeals on "Learning Curve" never fail to make me ill). Guitarist Paul Clark clearly has heavy-metal aspirations, what with the chug-chug chordage and piercing delivery. In fact, Cross has begun to put his violin into overdrive, adding to the heavy-metal atmosphere. I find this to be one of the more irritating aspects of this album. Add to this obnoxious lyrics like "The working class can kiss my ass," the likes of which I thought had died with the "new-wave" 80s. As a result, the vocal tunes are often like a dose of bitter medicine, at least in the first half. There are a couple of much nicer vocal tunes on the second half. "Tripwire," despite more lame lyrics, sports a nifty, infectious violin line. The lengthy "Abo" adds a patina of "world music" to the sound with prominent percussion and droning, didjeridu-like synth, and makes tentative steps toward a distinctive style. The instrumental tracks are often soured by perhaps the only tendency picked up from King Crimson, the free-form improv. Had this group been tighter, these might be more engaging, as it is, they seem to go nowhere awfully fast. The exception is "Cycle Logical," which builds a pulsing texture of guitar and synth, providing the ideal setting for Cross' solo. Had there been more songs like this, I'd be more satisfied with this album. The good moments of this album are unfortunately canceled out by dreadful ones. As a result, the album is as a whole rather mediocre. Therefore, this is only of real interest to King Crimson fanatics. But with King Crimson's surprisingly excellent Vrooom now readily available, expect this one to go deservedly overlooked.

Cross was, of course, the longtime violinist with King Crimson Mk2; I mention this first because Testing for Destruction bears more in common with that edition of KC than probably either of his two previous solo albums. The disc covers a lot of territory from eccentric hard-rockers to lengthy improvs to heady experimentation, combining the urgency of Starless and Bible Black period KC with the craftiness and tasteful deviance of some of the Canterbury bands (Caravan comes to mind), UK, and even Gong. The tracks are split roughly fifty/fifty between instrumentals and vocals; vocalist/bassist John Dillon being a true chameleon, he sometimes bears more than a passing resemblance to John Wetton, especially on "Tripwire" and opener "Learning Curve," the latter being a hard-rocking ass-kicker with some vague Arabic influences, punctuated by disconnected vocal sections with unusual lyrics. His heavy warble-treated vocals on "The Affable Mr.G" accompany a frantic full-throttle hard-rock led by guitarist Paul Clark, with energized solos for Cross' violin and keyboardist Sheila Maloney. Throughout, Dillon and drummer Dan Maurer handle the bottom end with precision and fervor. The aforementioned Arabic influences are even more evident on two of the more improvisational instrumental pieces "The Swing Arm Disconnects" and "Calamity," the latter sounding like a meeting of "The Talking Drum" and something from Erpland period Ozrics. The last third of the disc moves into a more experimental/improv mode, typified by the title track, and breaks only for the latter part of the closer "Abo," a vocal track featuring samples of didjeridu and indigenous percussion that may remind of Peter Gabriel's Security period. In all, this is a worthwhile album by Cross and his five piece band, a disc that should make an excellent and complementary companion to Vrooom.

Violinist David Cross is known to many for his work in the 70s with King Crimson. Less conspicuous have been a few more recent solo albums. His latest, Testing to Destruction, finds Cross fronting a five-piece band and playing some scorching heavy prog. There are some traces of Crimson influence in the sound, mainly in the dark and ominous moods highlighted by tritone intervals and modal scales, and in a few free-form, sound effects laden improvisations. Somewhat of a prog-metal sensibility permeates much of the album, as evidenced by the heavy rhythm guitar, the burning lead guitar solos, and the driving rhythm section. The music itself is sort of a mixed bag. Half of the tracks sport vocals, and the vocal sections tend to be weaker; fairly basic musical accompaniment to albeit solid vocals with occasionally cheesy lyrics, delivered in a rather heavy metal-ish style. But in between the vocal sections are some great incendiary instrumental breaks. Aggressive riffs provide a foundation for some fine soloing from the keyboards and guitar. Other parts of the album are more mellow and contemplative, featuring Cross' excellent violin work in a more unstructured context. Cross does a good job of sharing the spotlight with the rest of the band, and when the music allows them to, they can all deliver some spirited and driving performances. Of the nine tracks here most of them have their moments, and there is only one real throw-away tune, thankfully a fairly short one. Overall this is a slightly better than mediocre release; the instrumental sections are generally strong, but the vocal sections are closer to unspectacular neo-prog with a slight pop flair.