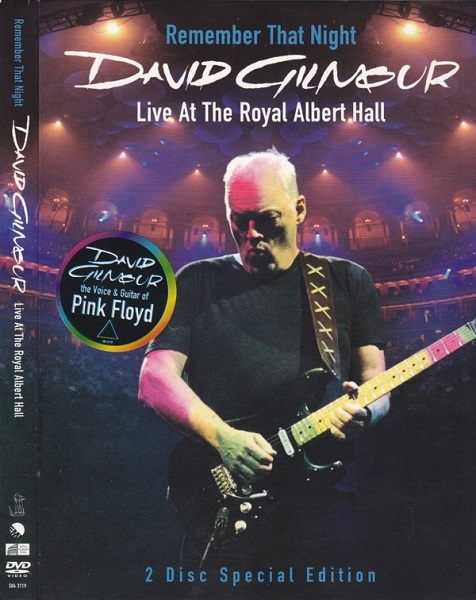 For those living under a rock, David Gilmour has recently completed a world tour in support of his 2006 solo album, On an Island, which this double DVD set documents and commemorates. Disk one captures Gilmour and his band on stage at the Royal Albert Hall and presents almost the entire show. Everything about the event screams "quality," from the reverent setting to the cast of guests that includes David Bowie, Graham Nash, David Crosby, and Robert Wyatt to the band itself that features Richard Wright, Dick Parry, Phil Manzanera, and regulars Guy Pratt, John Carin and newcomer Steve DiStanislou on drums. But though he tries not to steal the show, the most precious part of the whole package is undeniably David Gilmour and his still astounding guitar playing and ability to capture what made Pink Floyd so magical throughout their long history. Despite the amount of gray hair (or lack thereof), the music and performances on stage are stupendous and the audio and camera work capture it all in state of the art perfection. The set spans Gilmour's entire career, the first half presenting On an Island (itself not a weak batch of songs) in its entirety. Set two concentrates on Pink Floyd songs including the usual suspects, along with some nice surprises like "Fat Old Sun" and "Arnold Layne." The show culminates with "Echoes" from 1971's Meddle album and is given an energized delivery and Technicolor production. Disk two is loaded with bonus features that include a "Making of..." for the album plus a huge tour documentary where you see the cast and crew dealing with the highlights and struggles of carrying on a world tour. Tons of great individual moments are revealed including a chance meeting of Gilmour and Roger Waters who shared the same rehearsal facilities. It's hard not to be impressed by the camaraderie of the band and crew plus Gilmour's spontaneity along the way such as bringing an Italian street musician on stage in Venice or pulling "On the Turning Away" out for a show in Gdansk, Poland. This tour marked Gilmour's first public appearances since the death of Syd Barrett and he commemorates his predecessor's passing on several occasions, including a rendition of "Dominoes" and an intimate acoustic recital of "Dark Globe." The bounty of material on this set is almost overwhelming and makes whatever Best Buy or Amazon are charging for it seem trivial. A reformation of the full Pink Floyd may never happen, but for fans this worthy DVD set will certainly fill the void.

Makaras Pen - Makaras Pen – If you’re in the mood for dreamy female vocals drenched in reverb, there’s a bunch of bands you can turn to, many of whom populate the Projekt roster, but if you feel like a little more energy in...  (2011) » Read more