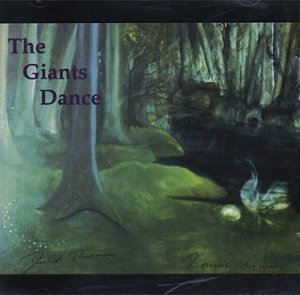 I guess at some point anyone even remotely connected with Genesis will come out of the woodwork to market their offerings. Case in point. David Thomas and Ronnie Gunn were two musicians who apparently worked closely with members of the original Genesis lineup back in their Charterhouse days, pre-first album. According to the liner notes, written by Tony Banks and Peter Gabriel incidentally, there was a pre-Genesis band called The Spoken Word, featuring Thomas as singer, Gabriel on drums, Ant Phillips on guitar, and Gunn on piano. Of course that band split up, Phillips and Gabriel moved on to different bands, and the rest is history. Their only contributions to a Genesis album were in the handclaps on "In Limbo" and the backing voices throughout the first album, Thomas and Gunn continued to write songs and work together throughout the 70s, their hope was that other people might record their songs. At times their paths crossed with the various Genesis members, in fact the earliest material on this collection was recorded at Ant Phillips' house in '73. Apparently Thomas also recorded the earliest demos for Gabriel's post-Genesis career. Enough of the history... what about the music?

The songs themselves are, for the most part pretty good, sounding very much in the vein of early (meaning really early) Genesis. Most of these tunes, if Gabriel had sung them and Jonathan King had added some cheesy orchestrations, would sound right at home on From Genesis to Revelation. This may be in part to the use of the strummy acoustic guitars and piano, as well as the delicate, slightly complex song structures and arrangements. Ant Phillips plays guitar on a number of the tracks as well, further fueling the FGTR comparisons. Other musicians add bass and drums on several of the songs. The sound quality, especially on the earliest stuff, is barely demo quality (after all these were not originally intended for release), and quite rough in the mix department; later recordings tend to be far more polished, culminating with the very impressive three-part title suite, recorded in '79. The 18 tracks are not presented chronologically, the oldest stuff being interspersed between the newer material, which probably ends up making the album more effective. At best, this is an archival curiosity for Genesis fans, but a good one nonetheless — if not so much for the execution, at least for the excellent compositions and arrangements.