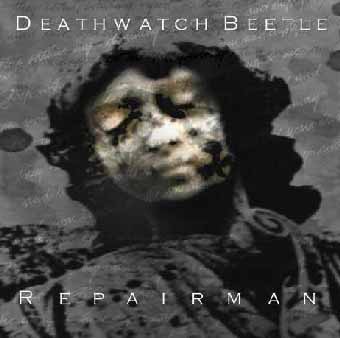 Debut albums from obtuse solo acts can be difficult to ascertain on the surface. The first few listens of this disc from the Toronto based artist sound very much like an alternative to some of the more ominous darkwave acts which are sprouting up across the world. Mr. Repairman is in actuality Mathew Riley, who has many inspirations including such modern heroes as Trent Reznor (NIN), Peter Murphy, or even Jim Morrison (The Doors). The best atmospheres are created on pieces which emphasize grandiose synths using an almost Ultravox type approach as on "Season of the Dead." The real odd tone, which I've come to appreciate, is that this project also reminds me of elements of the late Kevin Gilbert's work Thud but with a more electronic shift. Acoustic pieces such as "Violet and Green" use varying instrumentation such as mandolin and acoustic guitar as well as Arabic motifs or even sitar (as on "Kings of the Rooks"). The artist is also the graphics designer and layout specialist for his own disc too. The cover inlay depicts an angel statuary with strange blotches and serene facial expression: creepy! From the opening strains of "Dream of the Hollow Fishes" to the music box intro to "The Carny of Mr. Dark," a new musical identity appears to have been realized. This album should find’s it way into the hungry hands of darkwave and Goth fans looking for that strange but accessible artist to champion.