Desert Wizards — Beyond the Gates of the Cosmic Kingdom
(Black Widow BWRDIST 673, 2017, CD) 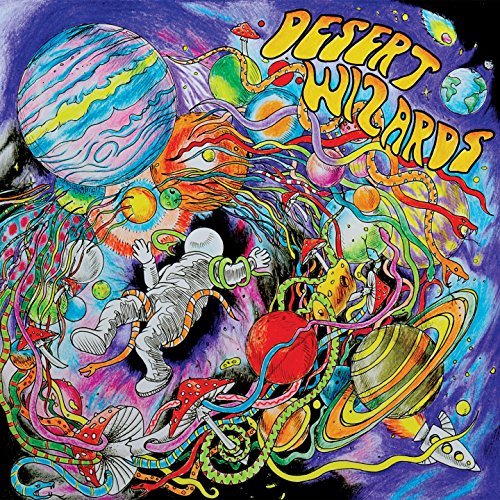 Italian band Desert Wizards’ second full-length album, Beyond the Gates of the Cosmic Kingdom, builds upon their 2013 album, Ravens, and shows a more focussed band. Like on Ravens, the songs on the new album jump back and forth between genres. The album opens with the gritty electronics and harsh guitars of the stoner rock “Astral Master.” Next is “Dogstar,” that begins as a beautiful ballad with a barking dog and morphs into a psych / prog jam with guitar and organ. The hard rock “Born Loser” follows with some organ chops that remind me of Al Kooper. Then the trippy ten-minute “Red Star” takes the listener on a sonic journey from pulsating bass synth to trancelike Italian prog. Now the Desert Wizards star to excel with “The Man Who Rode Time,” with its echoed guitar and gothic western vibe that ends with soaring wordless female vocals reminiscent of Dark Side of the Moon. This song is followed by another great tune, “Distant Memories,” that is a blend of Italian prog and stoner rock. “Snakes” is a slithery tune that moves between fuzzy analog synths, harsh organ chords, and heavy guitar chops that delivers some tasty psych jamming, And the album closes with the outstanding “A Light in the Fog,” with its organ, surf guitar, and saxophone drawing the listener through a gothic fog. Beyond the Gates of the Cosmic Kingdom is an excellent album and I hope it will not take another four years before the Desert Wizards release their next album.

Nautilus - What Colours the Sky in Your World? – Nautilus is a UK quartet of guitars, keyboards, drums, and bass. They play excellent instrumental music that is a melodic version of mid-period King Crimson, if you know what I mean. King Crimson can...  (2008) » Read more