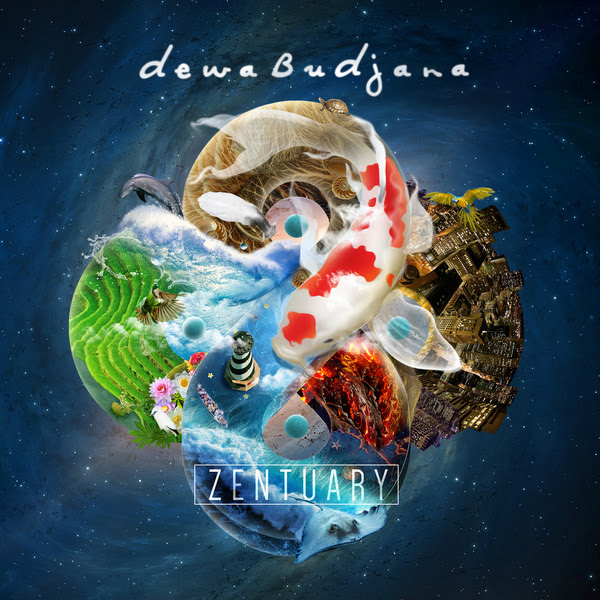 The gifted Indonesian guitarist Dewa Budjana is back again with Zentuary, a sprawling 2CD set that follows last years’ Hasta Karma. Here we have a dozen tracks covering over 100 minutes of music touching all facets of Budjana’s craft, with numerous star guests featured, track depending. This time he has enlisted Tony Levin as bassist and occasional Chapman Stick, Gary Husband covering drums on some tracks, piano and keyboards on others, and none other than Jack DeJohnette covering drums and piano on other cuts, forming the basic quartet for the bulk of the album, and a very different lineup than he worked with on Hasta Karma. The guest list is equally impressive, featuring (track depending) Tim Garland on tenor sax, Danny Markovich on soprano sax; two vocalists (Ubiet and Risa Saraswati) sing on one track each (this is still primarily an instrumental workout, though as he has done in the past, vocals are used to convey much of the Indonesian flavor of the tunes, and some of the vocals – for example on the opening track “Dancing Tears” are completely uncredited), suling (Indonesian flute) player Saat Syah plays on a couple tunes, and Aristocrats’ Guthrie Govan turns in a guitar solo on “Suniakala.” And the Czech Symphony Orchestra is featured on two of the pieces. Even with all that instrumental talent in support, this is still Budjana’s show, credited with all the compositions except one by Tony Levin and Markus Reuter. The basic sessions were done in upstate NY over a couple days in January 2015, with additional overdubs coming from all over the world in year that followed.

The disc one opener, the aforementioned “Dancing Tears,” is a rippin’ fusion workout which could almost be something along the lines of a violin-less Mahavishnu Orchestra, the guitars shifting from snarly electric to tasty acoustic and back in a matter of seconds, with the mysterious voices adding some strong cultural flavor whenever they appear. On the opposite end of the spectrum is the title track which closes disc two, a moody, somewhat introspective piece with a haunting melody, fleshed out by the orchestra, with Budjana adding some fiery lead licks right before the cut ends all too soon at just under three minutes. “Dedariku” is a highly emotional tune stretching out for nearly eleven minutes, with a powerful melody that will get stuck in the listener’s head, prominently featuring Saat Syah’s suling, the themes circle back numerous times with different variations, including one of Budjana’s most memorable solos of the entire set. The Levin / Reuter composition “Rerengat Langit (Crack in the Sky)” was originally featured on the Stick Men Power Play album, but here with Sundanese vocals added (translated from English by the female vocalist Risa Saraswati) along with some subtle gamelan percussion and suling transform this into a breathtaking version with local flavor, and another favorite from this set. The other piece with a featured vocalist (Ubiet) multi-tracked is “Lake Takengon,” an amazingly beautiful piece built initially on an acoustic guitar framework, which all but disappears from view after all the full band comes in making this a jazz-rock wordless vocal masterpiece. I could continue endlessly with words, but Zentuary truly needs to be heard to be appreciated.