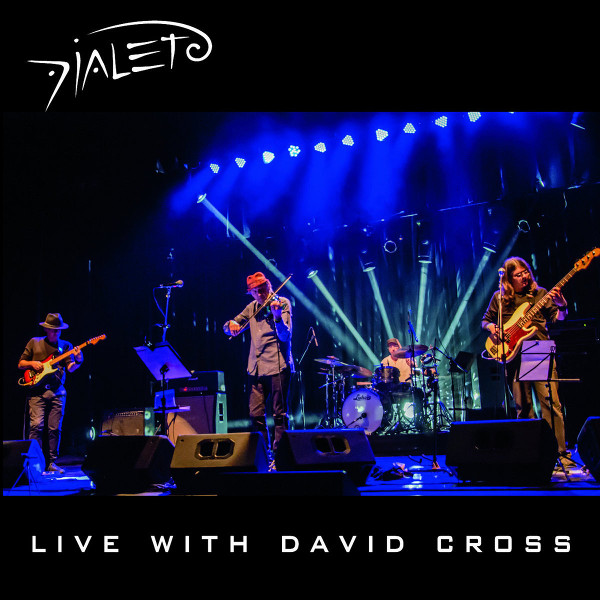 The title pretty much says it all, with Brazilian trio Dialeto expanding to a quartet with King Crimson violinist David Cross for this show on July 22nd, 2017, the second concert to promote their 2017 studio release Bartók in Rock. The show begins with the trio proper, guitarist Nelson Coelho, bassist Gabriel Costa, and drummer Fred Barley performing blistering versions of four cuts from the aforementioned album (“Roumanian Folk Dances 3, 2 and 4” (in that order) and then “Mikrokosmos 149” before the trio is joined onstage by Cross for four additional Bartók tunes “Mikrokosmos 113” (on which Cross contributed to the original studio take), “Mikrokosmos 78” (which was not featured on the studio album), then “An Evening in ihe Village : 10 Easy Piano Pieces No.5” (with no piano, of course) and “The Young Bride…” as the quartet ratchets up the energy level. Then, perhaps unsurprisingly, a version of “Exiles” with drummer Barley handling the vocal duties splendidly. Throughout all the Bartók interpretations the similarities in style with 70s King Crimson – especially Coelho’s Frippian guitar sustain technique – are evident, but by this point in the set Dialeto with Cross become an amazing Crimson tribute band, following with a version of “Tonk” from David Cross’ Exiles album, then on to “The Talking Drum” and “Larks’ Tongues, Part II” that are at least as powerful or better than the original studio versions, with the slow intensity buildup in the former nothing short of stunning. Back for an encore, the band performs an intense but respectful take of “Starless,” with Barley again handling the vocals with confidence and power. By the end of “Starless” the listener has undergone a true experience that elevates the studio versions to the next level. Whether one is interested in how Béla Bartók’s music can be adapted into a rock setting, or in a romp down memory lane with some of King Crimson’s timeless material, Live with David Cross is essential listening.