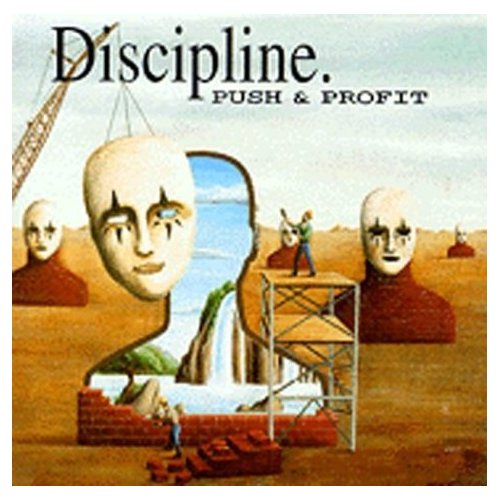 Discipline are a young five-piece band from Detroit, Michigan, whose instrumentation includes the usual bass / drums / keys / guitars with the fifth and front man doing vocals/violin/keys/guitar. While they unashamedly borrow their name from King Crimson, as well as cite Crimson, Zappa, Yes and Gentle Giant as major influences, they end up sounding nothing like Crimson at all really. The overall sound is more like Peter Gabriel, Marillion, Pink Floyd, and Gentle Giant. Push & Profit is a 1993-recorded collection of eight songs written between 1987 and 1992. Each song on this album is remarkably separable from the others, each offering a distinct and different style that the band is capable of. Unfortunately, the end result is an album of some tracks that are always worth listening to and some that are always worth skipping over. The best tracks are the Gabriel-esque "Diminished," the Floydian "Systems" and the obviously Giant-influenced "The Reasoning Wall," by far the best track on the album. This song has a strong verse melody with some unique intervals, and lively counterpoint instrumental break in the middle. Clearly, the drummer and keyboard player are the best musicians in the band, and this song shows that Discipline is capable of writing some complex and fascinating music full of neat time and tempo changes when they put their minds to it. In fact, its not too hard to imagine this song being performed by Giant themselves! However, some of the other tracks on the album show that the band is unclear about their direction. A couple of the tunes have little to do with progressive at all, really. The inconsistency in the music is paralleled by an inconsistency in the lyrics too, but fortunately when the music is at its best, so are the lyrics. The album seems to lack energy when taken as a whole, since many of the tempi are very slow, but taken in small chunks, this flaw isn't so obvious. The production and engineering are totally professional, well above what many other independent bands have put together for their first release. The lack of consistency is the biggest hurdle the band still has to overcome and because of that, Push & Profit is definitely not one for the "highly recommended" category. But because of songs like "Systems" and "The Reasoning Wall," it is an album (and a band) certainly worth a listen.

Ahleuchatistas - Even in the Midst – Maybe I'm just imagining it, but I swear this time out Ahleuchatistas are sounding more accessible than ever. Still crazy as hell, but maybe a little less abrasive. Or maybe I'm getting used...  (2008) » Read more