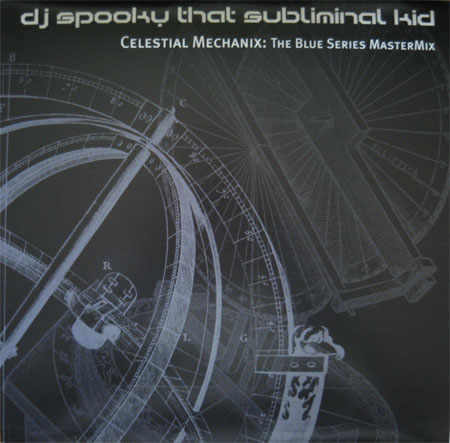 It’s not hard to figure out why DJ Spooky is in such demand in the New York downtown scene; it seems the man has no tangible musical boundaries by finding further riches in already excellent sound recordings. The modern sampling process has evolved into much more than the sample, borrow and steal orientation that only a few years ago was not identified as a viable musical source. Spooky straddles both sides of the fence: the compositional side as well as the sampling side and the best of both worlds is the intuitive outcome. His mastermix on this collection of reworks always focused on rhythmic sequences start here with “CD-DIR Gesture” before navigating into jazzy territory on “Travelogue – NYC to Hawaii.” “Lingua ex Machina” is Spooky’s own rap vibe of his collective mindset across a walking bass line. “Maldoror’s Gambit” merges mournful violins with jungle beats and even a few snippets of Star Trek samples of hand phasers that is quite amusing. Closing out disc one is a rendition of Craig Taborn’s “Shining Through” that gives an altogether positive new slant on the ambient and rhythmic shape of the piece. Disc two is one continuous 35 track sequence of pieces that cycles through many a substantial number of twists and turns. Beginning with the sampled announcer’s statement that “This is your story” into a brief piano interlude from Anti-pop Consortium’s project with Mathew Shipp and later into an extract from the pianist’s “New Bop.” The longest most ethereal bridge is sampled from Shipp’s Equilibrium CD with vibes and a straight 4/4 tempo. The mix closes with two ambient stylized tracks that end the piece on an ominous tone. Overall Spooky has a wide palette of tools to use at his disposal and he is fearless in his pursuit of the ultimate mix.

Richard Thompson - 1000 Years of Popular Music – When the end of the millennium started creeping up, lots of people started making lists. When it comes to the subject of popular music, most of us are only familiar with that of the 20th Century, with...  (2004) » Read more