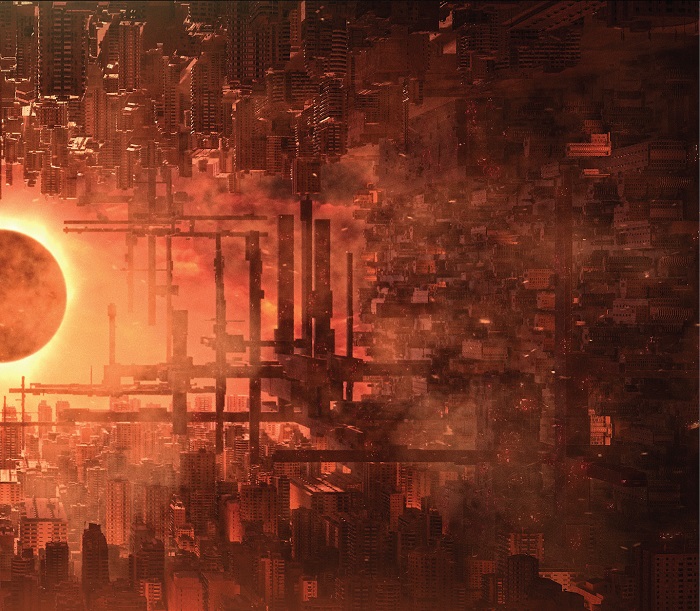 Thirty years on from their original releases, these two Djam Karet classics have been remastered and reissued in the same package as they probably should have been the first time around. From their earliest days, the band had an edgy rock side as well as a dark ambient side, the two styles seemed to coexist perfectly on their earlier releases, as they have on so many in the years since, but in 1990 they had an abundance of material recorded, and at that point decided to segregate the more hard-edged rock from the brooding dark ambient material and release two discs at the same time. Was it a good idea? Most readers at this point have probably heard both Burning the Hard City and Suspension & Displacement hundreds of times and probably love them pretty much the same. The band was certainly invested in both styles as they had proven on their two previous releases. One thing that has to be recognized is that now, both sound amazing as never before with this 2020 remaster courtesy of the band’s drummer Chuck Oken, which seems to have decreased some of the trebly edge at certain points on Burning and added a strong degree of newfound depth and power to the cuts on Suspension. The deep slow intro to the eleven minute “Feast of Ashes” on the former benefits from that too — I am hearing sounds I’ve never heard before in the dozens of times I’ve played it, at home or in my car, with and without headphones — there’s just more there to hear now. The deep bass hits near the beginning of “Ten Days to the Sand” are surely causing an earthquake somewhere!

With Suspension, one might hear more of the growling subharmonics amid the percussive sounds in those early minutes of “Dark Clouds, No Rain.” With “8:15 No Safe Place” there just seems to be more clarity in the sound, less confusion; similarly on “Erosion” — everything in the background can be heard as clearly as the foreground. The rumbling undercurrent of “Consider Figure Three” just reaches out and grabs you by the jugular while the anatomy lecture at the surface gets more distant with reverb, but remains understandable. Many of the song titles on both albums are references to the Gulf War, which was in progress during 1989 when much of the material was written — Province 19 for example was Saddam Hussein’s claim on Kuwait, the dark clouds were burning oil fields in southern Iraq. The closing track “A City with Two Tales – Part One Revisited” began life on their earlier 1987 release The Ritual Continues, there recorded live, which fully deserved the studio treatment it received on Suspension, but here 30 years later is certainly sounding better than ever.

The set also contains a third disc of excellent miscellaneous tracks from around the same period (1990-1991), some of which were recorded live on various radio shows, others from live shows, improvs, demo versions, and outtakes. The disc even has its own title: 1990: It’s Not All the Same. One could easily argue that the seven minute demo of “Province 19” packs even more power than the version that was eventually released on Burning, though probably not as superior recording-wise. “Gerbal Jammin” is an eight-minute improv the band recorded on KXLU in May ‘90. One of the outtakes worthy of note is “The Guitar That Stretches,” featuring amazing guitar solos that would have made it right at home on Burning, though it seems like some of the ideas therein were reused on other pieces. Some of the live tracks worthy of note include a shorter version of “The Red Monk” that was a key track on Reflections from the Firepool, a live version of “Swamp of Dreams,” the studio version which first appeared on the Past Present Future compilation LP the same year, leading straight into “Improv / Cities” recorded at the same live date. There’s plenty more on this bonus disc that make the set worth the price of admission alone. Add to that a beautiful twenty-two page booklet with many rare photos and liner notes by Mike Ostrich, all housed in an eight-panel digipak with all new artwork. The set is a limited edition of 450.

Cartoon - Sortie – The end of the 70s and first years of the 80s were a defining time in the history of progressive rock. The dinosaurs that had dominated throughout the first half of the 70s were rapidly becoming a...  (1994) » Read more