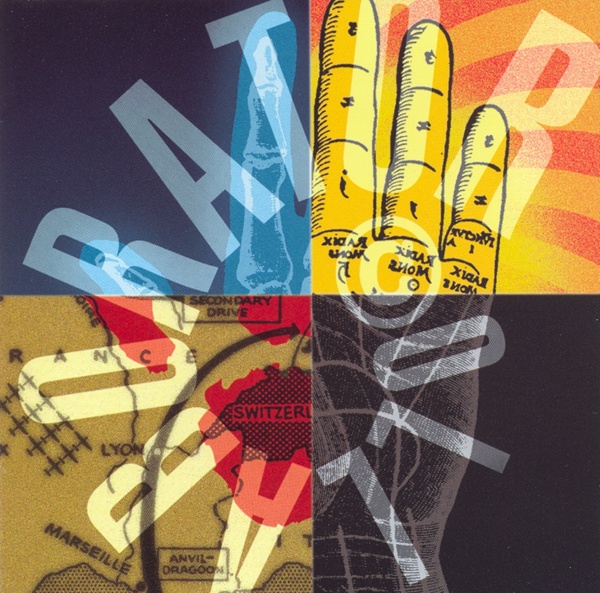 Having followed this band since their 1987 cassette release The Ritual Continues, I've always felt that their strongest suit was their ability to create atmospheres, emotional sonic textures that speak to the inner being. In their earlier days these were well integrated with their 'rock' tendencies to create a powerful and well balanced musical whole. In recent years the band has developed a split-personality, one of moody electronics and the other of jagged edged progressive rock, exemplified by their 1991 dual CD releases Burning the Hard City, which contained almost none of their experimental electro/acoustic material, and Suspension & Displacement, which essentially contained no rock. The division left less room for those tracks which straddled the lines in between the two styles, which was always their most interesting material. After three years and some personnel changes, the band has returned with this latest effort, a collaboration with seven other artists in the electronic/ambient realm. The collaborators include some well known folks like Steve Roach, Kit Watkins, Carl Weingarten, Jeff Greinke and Walter Holland, as well as a couple names most may not be familiar with — Marc Anderson and Loren Nerell. These artists all prepared some material for the project, but purposely left it incomplete. DAT tapes of this material were then sent to the members of Djam Karet, who completed the project by mixing in their own inputs. Surprisingly, most of the material here works quite well, although it's all very low-key in nature, probably even more so than Suspension, and like most of the material by Roach, Greinke, Holland and such, this is great music for relaxing and freeing up the consciousness, but I wouldn't recommend it while driving or operating heavy machinery! Most of the tracks are in the three to six minute range, short enough so that they don't wear out their welcome, but you'd know Steve Roach would have to contribute the longest track here, clocking in at nearly thirteen minutes; even so, it works. Standout tracks here include the "Salt Road" collaboration with Carl Weingarten, "Moorings" with Kit Watkins and Loren Nerell, and the Walter Holland contribution "Cliff Spirits." At 72 minutes, though, I rarely last through the whole play (of course the same could be said of World's Edge or any of a number of records by the various 'collaborators'). Overall an excellent release, but in the long term I think the band could do themselves a big favor by re-integrating their sound.

Finally, the wait is over. Three years after the awe-inspiring double release of Burning the Hard City and Suspension & Displacement, America's premier progressive ensemble have returned, but have undergone a major facelift. Drummer Chuck Oken, Jr. has bailed out, and before that word was out of lead guitarist Mike Henderson's departure. Although Mike has returned to guest on this effort, Djam Karet are currently bassist Henry J. Osborne and guitarist Gayle Ellett. The premise of Collaborator is this: using tidbits of incomplete musical fragments created independently by friends of the band onto DAT, Djam Karet would take those bits and finish them off with their own unique touches. These collaborators include Marc Anderson, Kit Watkins, Jeff Greinke, Steve Roach, Walter Holland, Loren Nerell, and Carl Weingarten. With a cast like that, it shouldn't be surprising that this album would further explore the more ambient side of the band, but rest assured this album is a far cry from a rehash of the ground already covered on the amazing and revolutionary Suspension & Displacement. Where that album used many acoustic guitars and electric guitar loops and patterns, this new release is void of either of those. There are more keyboards than ever before (again no surprise when you consider the musicians involved) and more emphasis on percussive backdrops. Holland's bright sequence which opens the album, and Greinke's delicate piano chords which close it are both timbres previously unfamiliar to the Djam Karet lexicon. The first two tracks are deceptive in their optimism and brightness, since the rest of the album is remarkably dark and haunting. Djam Karet continue to pioneer the electronic genre, with an unparalleled understanding of the timbral complexity required to make music of this nature succeed. And succeed they do, on a grand scale. This album strikes a deep nerve, and is emotionally stirring — the mark of master craftsmen. Highly recommended, and undoubtedly one of the year's best efforts.

Ozric Tentacles - Sunrise Festival – In years of late, at least for the studio recordings, Ozrics have been essentially the solo project of de-facto bandleader Ed Wynne (guitars and keys), with other players dropped in here and there on...  (2008) » Read more

Da Capo - Da Capo – Da Capo were a German band from Fürth in mid-Franconia who released one LP in 1972 that became one of the most sought-after German rock records. They recorded their seven-track album in two days and...  (2011) » Read more

Garden Wall - The Seduction of Madness – Now here's a band who has made some serious progress. From listening to Principium or Path of Dreams, there's no way of telling that they would have made this much of a step up. Yes, Garden Wall...  (1996) » Read more

Dalton - Riflessioni: Idea d'Infinito – Dalton were another beat group turned "progressive" in 1972, and yet another one with an adventurous bent on a well-worn style. Dalton were very similar to bands like early Metamorfosi, I...  (1995) » Read more