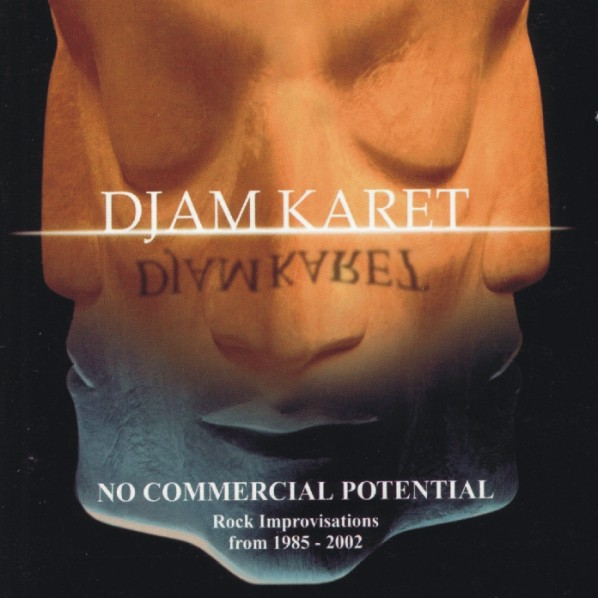 In some respects, Djam Karet can be viewed as a band with a split personality. Sometimes they are a tightly rehearsed unit performing composed music; sometimes they are purveyors of ambient soundscapes; and sometimes they are a spacey jam band devising lengthy improvisations. Or you could look at them as a band measured by two main parameters: improvised vs. composed, and ambient vs. rocking. Their recordings have had a fair range of values on these scales, from mostly composed like A Night for Baku, to this collection of improvisations. Their earliest recordings were improvised in April of 1985 and released on cassette as No Commercial Potential. Obviously the degree of composition is near zero, and the rock factor varies from “nil” to “rather.” Boiling the music down to simplest terms, these are one-chord jams with a healthy dose of freefloating space texture. The four musicians are good at allowing each other room, so when the bass steps out, the guitars back off; they also manage to pick up on rhythmic cues and provide good accents on the fly. For its long-delayed CD release, those original improvs are paired with a similar set from 2002, another group of three extended jams. The main differences are that they use keyboards a lot more, and they have better effects devices to play with. The keys mainly set up droning tones, as when they dominate the first ten minutes of the first track — though even within the droning, there are many subtleties to keep the music interesting. As the bass and drums appear, another one-chord jam develops, one with a lot of open space rather than cluttered attention-hogging. The second, shorter piece, gives us only the droning part, and ends rather than developing. The third follows the same pattern as the first, with a spaced-out drone featuring keys and effects that develops into a rhythmic section for guitar solos built on a single chord. It’s pleasant enough if you’re not in the mood for complexity, and the guitar work is occasionally brilliant, but a bit more variety would be welcome.