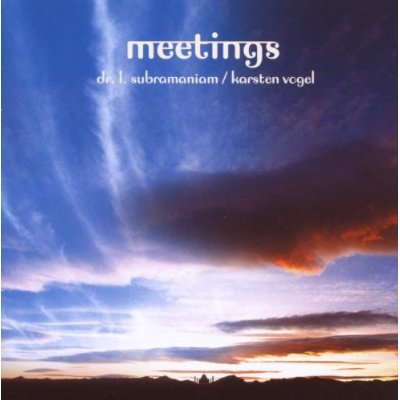 Dr. L. Subramaniam is an icon of Indian improvisation. From his Karnatic traditional undertakings and Western classical endeavors his international collaborations with Ali Akbar Khan, Yehudi Menuhin and Larry Coryell, his violin playing is infused with a knowing passion for space and mood. Karsten Vogel's roots stem from 60s psychedelia to his groundbreaking work with Secret Oyster; his career characterized as a unique woodwind voice cutting through the ether. Twenty years ago these six improvisations would have been called New Age but today they suggest something far more spiritual and ambiguous. Across three separate sessions, the atmosphere is open with plenty of space for the melodic elements of the pieces to spread out. "Morning Beauty" opens the disc with a timeless serene quality that permeates the sound terrain. Subramaniam's long legato lines disappear into the beyond along with Vogel's alto almost as easily as they both appeared. The two establish a casual dialogue on several tracks ("Tandoori," "Robannas Playground") but really engage in deep thought on "M G Road," "Five O'clock Twins" and the closing finale "Afternoon Silk." The first piece is a spirited jaunt while the latter two pieces show the wide range of the soloists. Ole Fick and Klaus Mender occupy guitar and percussion supporting roles across the disc, building a firm mat for the soloists. In closing, it's delicate musical summits like this disc that continue to push open the harmonious doors between East and West.