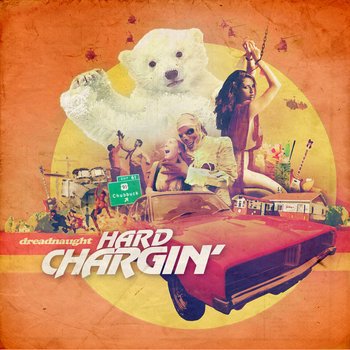 There are a lot of bands out there called Dreadnaught. If you are looking for the metal band from Australia, this is definitely not them. This Dreadnaught’s roots go back to the University of New Hampshire in 1996, also the year of their first cassette release which is impossible to find (but the best cuts from it can be found on the 2CD compilation High Heat and Chin Music, which is a best-of everything they did before 2005). The band is a trio of Bob Lord (bass, keyboards, and vocals), Justin Walton (guitar, keyboards, piano, sax, and lead vocals) and Rick Habib (drums and lead vocals), a lineup that has been the same since their two EPs Have a Drink with Dreadnaught (2013) and Gettin’ Tight with Dreadnaught (2015) following the return of Habib after about a ten year absence. They also feature guests on flute, violin, and a mysterious solo on the seventh track, a crazy countrified version of “That’s the Way That You Do It” – a track that appears three times in wildly different versions across the album. So what do these guys sound like? If you know Dreadnaught already and you’ve been following their trajectory over all these years, this is right where they should be. Like a lot of bands that develop at universities, their sound is a crazy mash-up of a lot of different styles that one wouldn’t expect to coexist, but they do.

On the opener “Have a Drink with Dreadnaught” (no, this song wasn’t on the EP of the same name), the band launches into a busy and chaotic three-minute mix of choppy rock, punky organ, bluesy slide guitar moves, great vocal harmony, and some interesting lyrics contributed by Geoff Logsdon and Jay Taylor. Seriously complex, but never too serious, the band is loose and very tight at the same time (how is that possible?) and an entire review could be written just about that one song, but there’s a lot more to absorb here. “Slave Girls” is a jangly rocker that punches and rolls between styles freely as it goes; it’s just crazy, like an adventurous mash-up between Echolyn and Estradasphere, all on overdrive with twists and turns coming at you with every measure. The eleven minute instrumental “Mummies of the Cobbosseecontie” covers even more territorry, with hints of jazz, metal, Zappa, funk, progressive rock, and more mixing freely in a crazy stew that switches off regularly surprising the listener at every turn. Perhaps the most instantly likeable song here is “Takin’ a Ride with the Fat Man (Fatta Fatta Puck Puck)” which seems to channel a rippin’ southern rock style through a sort-of Mr. Bungle meets early 10cc mode, with lots of diversions at seemingly every corner, and of course a great drum solo and instrumental break in there before it gets back to the main song, and then drifts of to a really weird ending. “Bo-Leg-Ba” is a completely wacked tune that follows, only a minute and a half, but there’s a lot of craziness stuffed into those measures. There’s a lot more here that needs to be heard and replayed many times, but the long and the short of it is: if one is looking for fun, adventurous rock tunes that go all over the musical map, you can’t do much better than Hard Chargin’.

Amon Düül II - Eternal Flashback – By now everyone should know that these classic German space rockers have reformed after about a twelve year hiatus. Last year's Nada Moonshine #, while not quite up to the standards set by their early...  (1996) » Read more