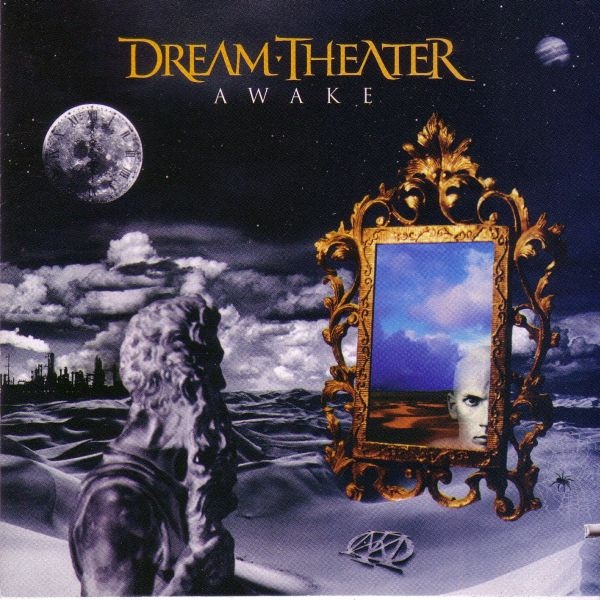 The second album by this part-prog, part-metal outfit with vocalist Jamie LaBrie follows in the footsteps of its predecessor Images and Words without changing much. LaBrie tries to sound more gruff and harsh in a few places, but basically still strives (successfully) for that gimmicky, operatic, glam crooning of the radio-friendly pop-metal frontman. The opener, "6:00," shows off keyboardist Kevin Moore with a lead solo that is so totally guitar-like it seems that he would rather bang his head with a 6-string ax than the good old ivories. The real shame, of course, is that he's got great chops but little sense of what it means to play a tasteful line with finesse. In fact, that could easily be said of the whole band, particularly drummer Mike Portnoy, whose lack of craftsmanship is apparent on every tune as he mindlessly plods along with rigid double-bass drumming so cold frost may form on your speakers. The production is equally as glossy (all surface glitter, no real warmth) and typical for this brand of music. One exception worth noting however is lead guitarist John Petrucci, who has some truly incredible guitar tones in his palette, and rips off some stunning solos. But even he falls into the traps of the stereotypical metal guitarists when he tries to see how many meaningless notes he can cram into a two-second lick. The song structures here are perhaps even more formulaic than they have ever been, often resting on traditional pop structures of verse/chorus for lack of anything more inventive. At the worst moments, LaBrie does some vocal harmonies in the chorus sections which rival the lowlights of Journey or Kansas. As an aside, most people may already be aware that keyman Moore has bailed out of the band. His replacement? Ex-Alice Cooper keyboardist Derek Sherinian. Clearly, Dream Theater have a major challenge in front of them as they attempt to assimilate Derek and his background. Awake is the work of a band with a lot of talent and potential but less than mediocre delivery. Perhaps that's due to having one eye on the profit meter, or perhaps an ego fixated on the perceived importance of image, but nevertheless die-hard Dream Theater fans are sure to enjoy this album while the rest of the prog-world continues to shake its head in frustration when people think this is what prog is all about.

Over the past few years, Dream Theater has become one of the most talked about bands in several music circles. It's is a band about which most people have a strong opinion. If you like heavy metal or hard rock, they won't disappoint you. If you get annoyed at machine gun drums and lightning-fast solos, you'd better look elsewhere. Awake, the band's second release with the current lineup, is an album with more diversity than previous efforts by the group. While this might sound like a good thing, I'm not entirely sure that it is. While the stylistic variety is there, the songs don't flow together as well as on their last album, Images and Words. The songs are not as consistently strong. It almost sounds like the band picked one rock song, one metal song, one ballad, etc. to target everyone. A little more focus and continuity would have helped a lot. Overall, the album has a harder edge to it than anything the band has released before. Parts of some songs, like the opening of "The Mirror," sound like they would be from a Pantera album. Actually, the best songs on the album are those with the hardest edges. I wouldn't have guessed that would be the case prior to listening to it, but it is. Clearly, what these guys do best is rock. When they try to lighten things up and ease back a little bit, it falls short. Check out "Lifting Shadows off a Dream" to see what I mean. Dream Theater draws from bands like Kansas and the Dixie Dregs and, like those bands, has a distinctly "American" sound. Even if you don't like their music, you'll be impressed with the technical ability of the players. Following up a successful and highly acclaimed album like Images and Words is tough for any band, but with the exception of a few weaker tracks, Dream Theater does a respectable job with Awake.

Judging by the various opinions that I had heard concerning this album, Awake was either the best album released so far this decade, or a worthless piece of tripe. I opted for believing the pessimists. When the release in question finally hit my stereo, I was mildly surprised. As far as "progressive rock" goes, Awake is very much a hit-or-miss album. It is commercial, MTV-ready, formulaic, and not nearly as complex as some people seem to think. As heavy metal goes, this is a pretty decent album. After ten years of obscurity, Dream Theater is one of the more successful new bands, as they have a fairly large mainstream following. Based on the more accessible 70s bands (Rush, Yes, Kansas), they update that style with influences of 80s progressive metal (Queensryche, Fates Warning, Crimson Glory). The band is a five-piece: vocals, guitars, bass, and keyboards. The bass and keyboards are relegated to largely rhythmic roles, usually following the guitar or chording atmospherics. Guitarist John Petrucci wears his influences on his sleeve: Alex Lifeson, Steve Morse, and Yngwie Malmsteen in particular. Although he is quite skilled, his style consists of typical metal riffing coupled with lightning-fast, slightly masturbatory soloing. Drummer Mike Portnoy's Peart-influenced skin-bashing adds some depth to the album, but he relies on simple snare-bass pounding all too often. Vocalist James LaBrie is a reasonably good singer when he isn't trying too hard to sound like a traditional rock vocalist. Awake consists of over 70 minutes of music, moving from radio-ready rockers, to ballads, to quasi-cerebral pieces. But after listening to this release in depth, their failings are obvious: essentially, they are a band with very tight chops and an above-average amount of technical talent, that either can't, or won't, write music that breaks any new ground. I found Awake to be a nostalgic listen, bringing me back to the days of Queensryche's Rage for Order, Dio's Sacred Heart, and Rush's Moving Pictures, with a bit of Dokken, Crimson Glory and Fates Warning thrown in. In other words, "Hello, mid-80s." While they do shine compositionally for a few moments here and there, 90% of Awake is simple riffing and chording, and says little musically. In fact, their debut, When Dream and Day Unite, stretched the genre much more than this release does. I can see why fans of progressive metal will enjoy this band; the music is very accessible and the level of musicianship is high. However, the level of innovativeness is low, and I prefer the over-the-top metal bands such as Cynic, Death, Watchtower, Seige's Even, Deicide, and Atheist to Dream Theater. All in all, Awake left me with a lukewarm feeling, most of which was nostalgia.

The Bass Gang - Evasioni, Fughe & La Contrabbassatta – Alberto Pocini is a double-bass player from Italy who's played extensively in his homeland as well as with the London Symphony Orchestra. Pocini's After Genesis project attests to his varied musical...  (2007) » Read more

Enchant - A Blueprint of the World – An American band, and another in a long line of neo-progsters produced (in part, at least) by Marillion guitarist Steve Rothery. Someday, someone ought to make a compilation of Rothery's productions....  (1994) » Read more

Soh Band - No Problem at All – Soh Band is a Japanese quintet who play the familiar variety of eclectic fusion native to their country. With a sound at times not unlike fellow countrymen Il Berlione, they mix a bit of...  (1997) » Read more

Via Lumini - Vôos e Sonhos – This was the last Progressive Rock Worldwide release to appear in LP format, and as of yet has not been reissued on CD. Unlike the Tellah album, this release was by a new young band from Sao Paulo....  (1997) » Read more