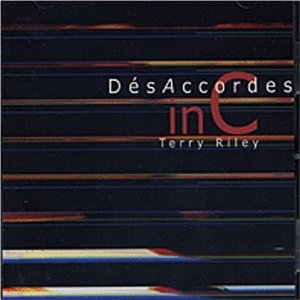 Erik Baron is a French bassist we’ve heard from before (his excellent Cordayades CD from a few years ago was favorably reviewed in issue #29), but this time out his primary role is that of conductor of an orchestra of acoustic and electric guitars, bass guitars, plus a couple cellos, a harp, and two percussionnists (28 musicians in all), doing an adaptation of Terry Riley’s pioneering cyclical minimalist epic In C. There are a few recognizeable names among the musicians: Philippe Cauvin, Minimum Vital bassist Eric Rebeyrol, and cellist Serge Korjanevski from Xalph and Philippe Cauvin’s band, but don’t expect to hear any of their distinctive styles standing out here, as everyone is playing the same three to five notes over and over throughout the entire piece, now grouped into five seamless movements. Like the original, the intensity flows and ebbs as variations introduce themselves slowly and cycle through as the piece evolves and unfolds. In fact this version stands up quite well to other versions this writer has heard, including Riley’s own 1965 performance. While this type of music in general may not be everyday listening for many, Baron’s interpretation is nonetheless outstanding and certainly deserves attention.

Flower Travellin' Band - Satori – Psychedelic bands in Europe and North America often incorporated aspects of Middle-Eastern or Indian music into their own styles. So what happens when a band from Japan does the same thing? On the one...  (2006) » Read more