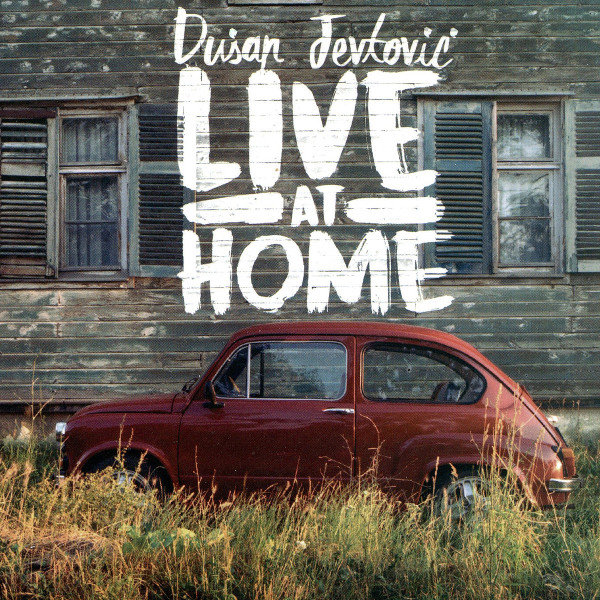 Dušan Jevtović is a masterful guitarist, and this live set was recorded in December 2016 in Jevtović’s home town of Kragujevac in Serbia, at the Dečije Pojorište with the support of SKC (Studenski Kulturni Centar). One might ask why another live album when he had just released one in 2015? That live album was reportedly very noisy (audience noise and feedback) so perhaps Live at Home – which was recorded even before his last studio album No Answer was released, is an attempt to offer a very clear and uncluttered live recording that deserves to be heard by all. The band this night included keyboardist Vasil Hadžimanov, who has about a half dozen or more albums of his own (two of the cuts performed here: “Briga” and “Ohrid” were culled from the third album by his band) and played an important part on the aforementioned studio album, and the rhythm section of Pedja Milutinović and Pera Krstajić, on drums and bass respectively. Right out of the gate we get the title track from No Answer sounding intense and powerful as ever. Next up is a medley of “Angel” (a short vocal tune) and the tradidional tune “Al Aire – Soko Bira” that was the opening track on that album, although here they stretch it out from five to a full nine minutes. After a nine-minute workoutout of Hadžimanov’s “Ohrid” we arrive at “New Pop,” one of Jevtović’s contributions to the Random Abstract album by XaDu – Jevtović’s 2015 collaboration with drummer Xavi Reija. I’m not sure where “Babe” came from, but it’s a Dušan original that begins with a short section with some uncredited vocals, then bursts into a powerful and rocking Mahavishnu-like instrumental full of gusto and grit. After Hadžimanov’s “Briga,” which encompasses elements of traditional, jazz, rock, and much more pushed out into a wonderful ten-minute suite with more uncredited vocals, where he rightly gets his Zawinul influence out in the open, we arrive at “Gracias y Perdon,” an avant-garde piece from Jevtović’s first album On the Edge, which closes the set nicely. Mind blown!

Richard Pinhas and Merzbow - Keio Line – Having redefined the scale of sonic monumentalism with the 2006 two-disc set Metatron, Keio Line cleaves to the opposite – a two disc set of comparatively simple instrumentation reliant upon the...  (2009) » Read more