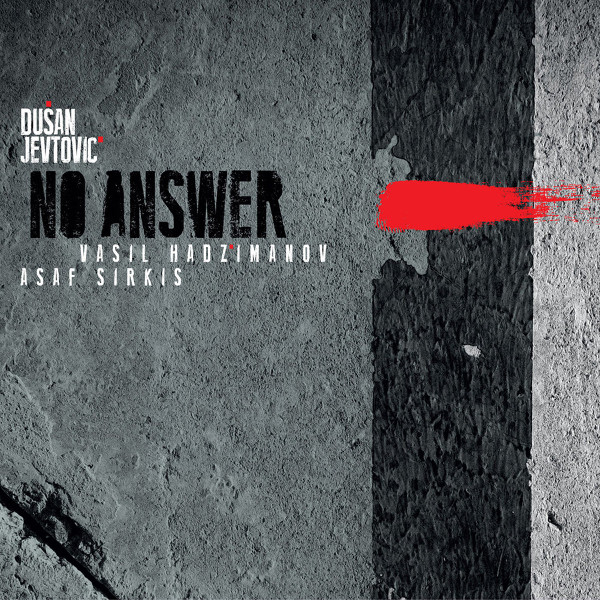 Dušan Jevtović’s last release under his own name was Am I Walking Wrong? which was a guitar trio outing that ventured into powerful creative territory. Then there was XaDu’s Random Abstract, his duo with drummer Xavi Reija, which is very noisy at times, with lots of overdriven tones. No Answer puts Jevtović in a different type of trio setting, accompanied by keyboardist Vasil Hadžimanov and drummer Asaf Sirkis. Although it’s Jevtovic’s name on the cover, the partnership with Hadžimanov is nearly equal. Piano is the first thing you hear, a dreamy pattern in an odd meter, with the guitar coming in 30 seconds later with distorted (but relatively quiet) long tones. This piece, “Al Aire / Soko Bira,” builds up slowly with the long, low tones of the guitar filling the low end, until about three minutes in, when they come together with a great unison riff with guitar and electric piano. For a time, the piano pattern joins in with the electric piano keeping the riff going. The next track features a clean guitar tone with the kind of floating sustain that Bill Frisell is known for, but it morphs into a nice jazzy composition featuring electric piano chords and a synth handling the bass part. After Jevtović’s solo, Hadžimanov takes a turn with a wobbly chorus effect on the electric piano. “Yo Sin Mi” is a more acoustic tune with piano and clean-tone guitar, and reminds me of something that could have been on John Abercrombie’s Timeless. The feeling of early 70s fusion is frequently present, not the flashy unison lines or superhuman technique, but an adventurous spirit of playing tunes with electric instruments. Sirkis keeps things light with his drumming, with subtle work on cymbals and snare. The track called “Lifetime” does indeed recall the sound of Tony Williams’ band, with electric piano, gritty guitar, a really edgy solo from Jevtović (probably his best on the album), and a tasty shuffle beat on the drums. No Answer serves as further proof that this guitarist is someone to pay attention to, a distinctive voice in a world full of cookie-cutter shredders.