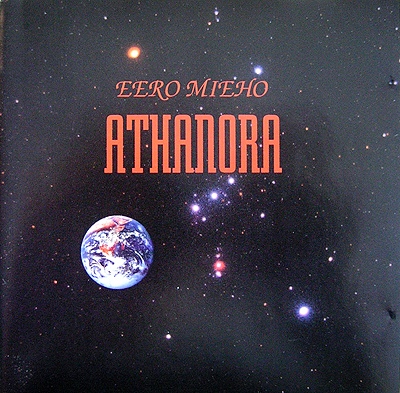 Originally recorded in 1992, Athanora is a mystical album from Finnish keyboardist/harpist Eero Mieho who has pulled no less than 16 other musicians together to fill in the rest of the parts, on such instruments as guitar, vocals, marimba, oboe, sax, flute, drums, bass, and choir. But don't expect to hear a lot of these instruments going off at the same time; instead, the music is pretty low key (with a some very notable exceptions) and only uses these guests a few at a time, on an almost "as needed" basis, with guitarist Vesa Auvinen and Eero himself the only players to appear on each of the nine tracks. As previously noted, the writing is very low key, dark, mysterious, and moody which works to some extent but becomes a bit dull after a while. But just when it seems that the duration of the album will follow this pattern, a massive section of busy drumming, majestic guitar soloing and full vibrant chords rises to the fore, with a power and effectiveness that will make you wonder why the whole album didn't follow suit. Athanora is an impressive effort for an independent release, and is no doubt original, but with so many low spots it's hard to give it anything more than a marginal recommendation.

U.K. - Concert Classics Volume 4 – I was pleasantly surprised to find a copy of this live series disc at a local SF Bay area shop in the bin with the regular monthly releases. Considering that Volume 4 had supposedly been pulled by...  (2000) » Read more