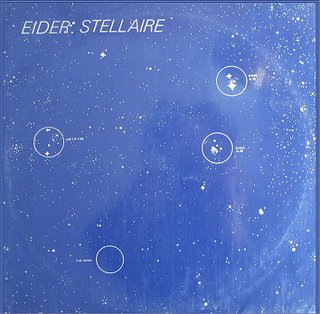 1981 was the year that Magma released their Retrospective albums, two live LPs (one a double-set) recorded at L'Olympia in Paris, recapping some of the band's best work to date, collecting various musicians that had played with the band over the previous ten years. The only new song was the side-long "Retrovision" that pointed toward the direction that Magma would take in the 1980s – Merci. So it's against this backdrop that several new bands emerged capturing the essence of the style that Magma originally pioneered and taking it forward into a direction that Magma had abandoned. Drummer Michel LeBars' band Eider Stellaire was one such group, a five-piece of guitar, keyboards, bass, drums, a dedicated female vocalist, and guests on flute, sax, and additional vocals. There never was an Eider Stellaire album titled I – this is a reissue of the first of two self-titled LPs that were issued privately in micro-quantities five years apart, one of those records that until recently everyone said would never be reissued because the master tapes were lost. Surprise! Leave it to Soleil Zeuhl to even find a bonus track in an alternate (three minute longer, and arguably better) version of album closer "Nihil." Their sound here is pure zeuhl through and through, the vocals (mostly scat propelled), the throbbing bass, the delightful angular piano jabs and electrifying keyboard work, some blistering guitars applied judiciously, and the ever-busy hyper-drumming of Le Bars. Anyone who appreciates the mid-70s Magma style (MDK through the Live album) will surely find this reissue essential.

Collage - Moonshine – Well, this album gets off on the wrong foot, but definitely ends up on the right one. The album opens with some heavy keyboards and drums and then the vocals come in... and you can't understand a damn...  (1995) » Read more