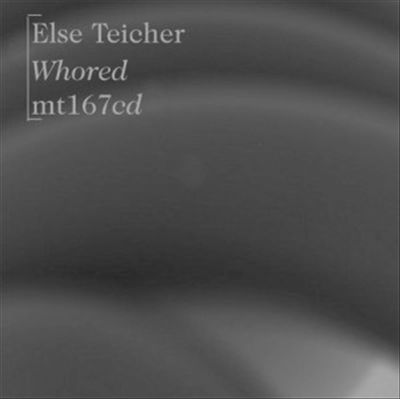 Very little is available regarding Ms. Teicher, the only information I could find is on the BlRR web site. Apparently Else has been releasing limited run cassettes and CDRs for the past 20 years, and for a time she was half of Romulus and Remus. Consequently I believe that Whored may be her first non-vanity pressed solo release. In addition, some of Else's sonic paintings have appeared on a couple of BlRR compilations. On Whored, a limited edition release of 300 copies, appear nine different analog electroacoustic compositions ranging in length from 30 seconds to 27 minutes at times flirting with Stockhausen's pioneering tape editing techniques (Gesang der Jünglinge), early Klaus Schulze (Irrlicht), and Zoviet France. Else uses toy piano, short wave radio, electronics, effects, and other source material that is so heavily processed as to be unrecognizable to create some hauntingly, and at times twisted, hypnotic compositions perfect for drifting in and out of consciousness. Some appear to be parts of a larger composition as they seamlessly flow from one track to the next. Most are quiet, rhythmic, and almost melodic. However, if you are looking to clear the house of unwelcome guests, "(Staring at) A Glow-in-the-Dark Thing" is sure to annoy almost everyone with its dissonant and noisy electronics. Though not for everyone, this disc should appeal to lovers of ambient drones and experimental editing and compositional techniques.