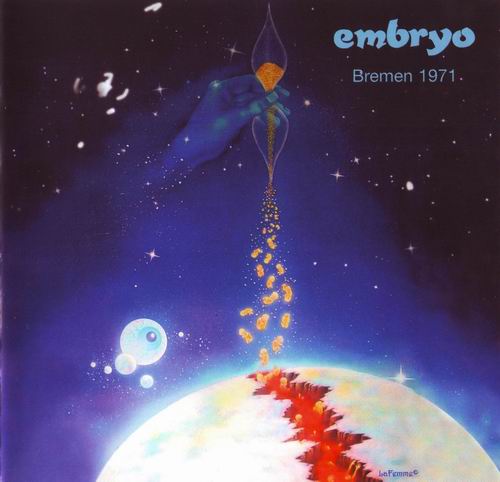 This live set from September 1971 finds the band just after recording their highly regarded Embryo’s Rache album, but before it had been released. This is still the early phase of the band, more a spaced-out jazzy jamming unit than the ethnic-Krautrock fusion they would later become. The line-up features the core duo of Edgar Hofmann (sax and violin) and Christian Burchard (drums) with relatively recent recruit Hansi Fischer on flute, all of whom had participated in the Rache sessions. The bass chair is filled by a returning Ralph Fischer, who was not on Rache, but had played on the previous album, Opal; guitar duties fall to newcomer Al Jones; there are no keyboards credited for this show, though I swear I hear some during “Spain Yes, Franco Finished” (probably played by Hansi using the process of elimination). The material consists entirely of extended and reworked tunes from Rache, all played with a lot of spirit. The vocals are enthusiastic, if not technically perfect, but Embryo was never a vocal-oriented band. The recording quality is quite good considering the age of the tapes, and captures an early high point of a band that would go on to have quite a few other high points. Sax, violin, flute, and guitar all have great moments, and the rhythm section performs well throughout, navigating the tricky meters.

Gerard - Save Knight by the Night – Keyboardist Toshio Egawa is one of the prime movers in Japan's progressive rock scene since the late 70s – originally with the band Novela, then splitting in the early 70s to form his own...  (1996) » Read more