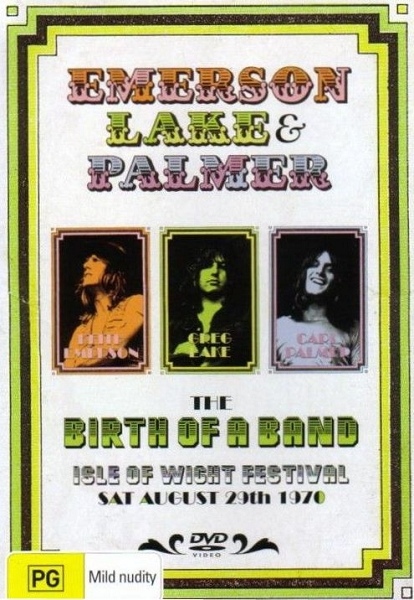 Having seen bits of the footage floating around, I was excited to learn that Emerson Lake & Palmer’s live debut at the 1970 Isle of Wight festival was finally going to have an official DVD release. This was an historic event, not just for E.L.P. but for progressive rock music as well since, other than King Crimson’s bursting on the scene the year before, the world hadn’t quite seen anything like this at the time and this event helped to make the band famous overnight. This is really two disks in one; one side is the concert film plus recent interviews with the band and John Graydon (infamous former ex-partner of E.G.) to be played on a DVD player. The other side is a recording of the show (most of it, anyway) for play in a CD player. Upon listening to the four songs that comprise the CD (early and pretty raw — especially from Greg Lake — attempts at “Pictures at an Exhibition,” “Take a Pebble,” “Rondo,” and “Nutrocker),” it becomes clear that E.L.P.’s live show had been shortened to fit into the slot the band was given, but also that parts of some songs have been edited out, Lake’s acoustic guitar soliloquy in “Take a Pebble” being the most obvious victim. But a worse fate befalls the film of the concert. Other than “Rondo” (which is pretty cool, I’ll admit) most of the film of the band’s performance is missing. A large swath of “Pictures at an Exhibition” is absent and there’s even less of “Take a Pebble” (and none of “Nutrocker” at all). Instead, the viewer is treated to Murray Lerner’s documentary footage shot around the Isle of Wight while the soundtrack plays over it. Or worse, footage from other songs is substituted and edited to appear to be what you’re listening to. Does the missing footage even exist? Or is it not in good enough condition to use? Who knows, but film of speedboats and hippies bathing in the surf are hardly reasonable substitutes. E.L.P. fans and completists will probably be willing to look past these shortcomings, plus there’s certainly value in the concert recording and interviews. But otherwise all I can say is buyer beware.