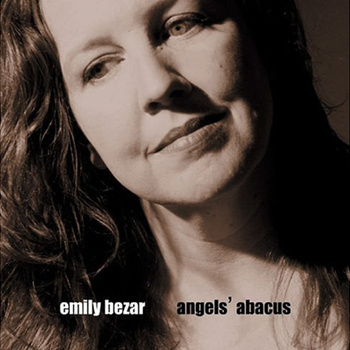 Back in Exposé #20 I gushed about Emily Bezar’s first three albums, and honestly the only negative I can come up with for her new release is the fact that it took so long to arrive. The changes from 1999’s Four Walls Bending are incremental rather than fundamental, but why mess with such a good thing? The two basic ingredients of the music are her powerful voice and piano, and all the embellishments serve as seasonings to those. She has the good sense not to ignore her years of voice training, the good taste to make that impressive technique subservient to her musical vision, and the courage to use her crisp enunciation and warm vibrato regardless of contemporary trends. There is a bit less of her classical-meets-jazz piano here, due to the frequent denseness of the arrangements; there are still moments reserved for piano and voice alone, or nearly alone, as intriguing electronic sounds creep into the interstices of every track. On a few tracks, the electronics condense into rhythmic loops, but this is no knuckling-under to modern fashion — the music is above all uncompromising, relentlessly following an educated, capricious muse to such lengths that Bezar is a genre unto herself. In lesser hands, all this would come off as pretentious, but every note is filled with such honesty that you can’t question her motives. She is not showing off, she is manifesting the music in her head, and it’s a thing of beauty.

Happy Family - "Flying Spirit Dance" Live – It's rare that I'll devote an extensive review to cassette, let alone to a demo cassette - but this band is so special that I feel compelled to sound out their praise far and wide. Happy Family are...  (1993) » Read more