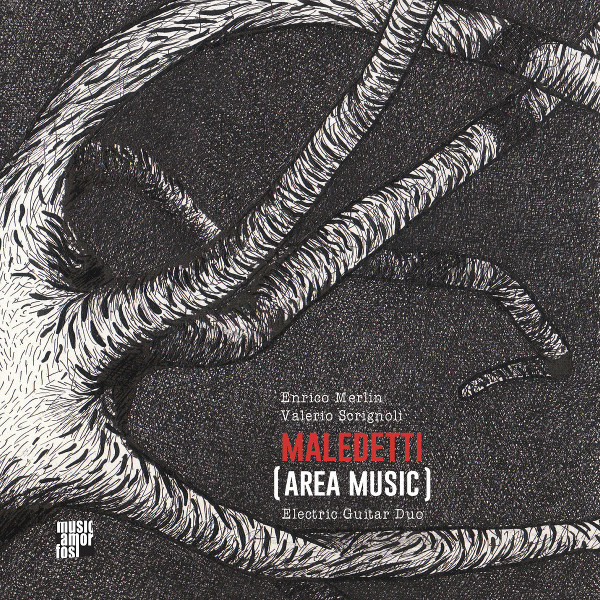 This is both an interesting and an odd release. Based on the music of Italian progressive rockers Area, it is not a set of covers, but instead the eight songs selected for this album are launching pads for the electric guitar duo of Enrico Merlin and Valerio Scrignoli to take off and explore strange new worlds. Born in 1964, Merlin is one of the most intriguing personalities in today’s European music scene. Guitar player, author, teacher, and curator for various jazz festivals, Merlin is known for his unconventional approach to music. And Scrignoli, born in 1960, is one of the most original musicians of the Italian avant-jazz scene having played guitar since the 80s. He is a jazz-trained guitar player with a variety of projects (jazz to rock) featuring his unique style. When Musicamorfosi approached them about this project, they thought it was a crazy idea given Area’s complex music: improvisations, odd time signatures, and polyrhythms, plus Demetrio Stratos’ unique vocal stylings. So they decided to come up with an alternative way to play the music and at the same time develop their personal vision of this difficult and amazing music. The eight instrumentals on this album are based on “Evaporazione" from Maledetti, “La Mela di Odessa” from Crac!, “Cometa Rossa” from Caution Radiation Area, “Hommage à Violette Nozières” from 1978 Gli dei se ne vanno, gli arrabbiati restano, “L'Elefante Bianco” from Crac!, “Luglio, agosto, settembre (nero)” from Arbeit Macht Frei, and “Vodka Cola” and “Il Bandito del deserto" from 1978 Gli dei se ne vanno, gli arrabbiati restano. If you were familiar with Area and listened to this new album blindfolded, you would think that this disc is merely a collection of improvised guitar riffing with occasional excursions into the avant garde similar to the middle of “Interstellar Overdrive,” sprinkled with jazz funk rhythms and loops (forward and reversed) like Manuel Göttsching’s Inventions for Electric Guitar. In most cases the instrumentals are totally unrecognizable from the originals. So if you are ready for a totally different and adventurous take on Area’s music, this album is for you.