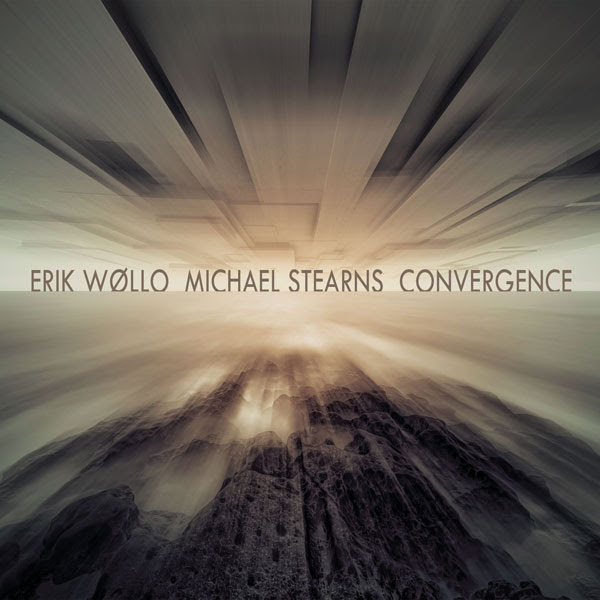 As one of the founding fathers of the floating ambient genre, Michael Stearns can’t be accused of glutting the market with product, especially in the new millennium, but what music he does release really counts. It may be because his time is divided between soundtrack and television work and other endeavors. Even at that, since 1977 he has released over thirty albums, either solo or in collaboration with other like-minded sonic pioneers. Wøllo, by comparison, started his career in the early 1980s as something of an ECM style guitarist, but quicly moved into a more ambient guitar style and has been developing and perfecting that style in all the years since, now with close to four dozen releases to his credit, both solo and in collaboration. Convergence is their first collaboration together, the ten tracks spanning around 72 minutes and covering a lot of territory, wherever their musical interests converge. Throughout the set, the contribution of both artists remain astonishingly clear, without any mistake, the synths (primarily Stearns) and guitars (primarily Wøllo) create a sonic envelopment of surprising clarity The opening cut “Triptyk” sets the stage, and is also the longest of the tracks at nearly ten minutes, with shimmering textures, colorful sequences and deep but bass subtle pulses and percussion offering a panoramic vista for Wøllo’s soaring guitar melodies. Far darker and mysterious, “Subterranean Canyon” follows a serpentine path, growing slowly and persistently through patterns of sinister and shadowy patterns. As with all of the tracks here, it makes a concise statement that never overstays its welcome, perhaps leaving the listener wanting just a little more. From a vast spectral summit. The aptly titled “A Solitary Place” builds powerful imagery from the summit of sonic beauty, flowing outward to horizons in every direction. “The Way Ahead” is presented in two parts separated by three other tracks, a rhythmic piece powered by subtle pulses, whispering wind and glistening starlight, the latter more evident in the second part. The power and majesty of Convergence is absolutely stunning in every way, and gets my highest recommendation.