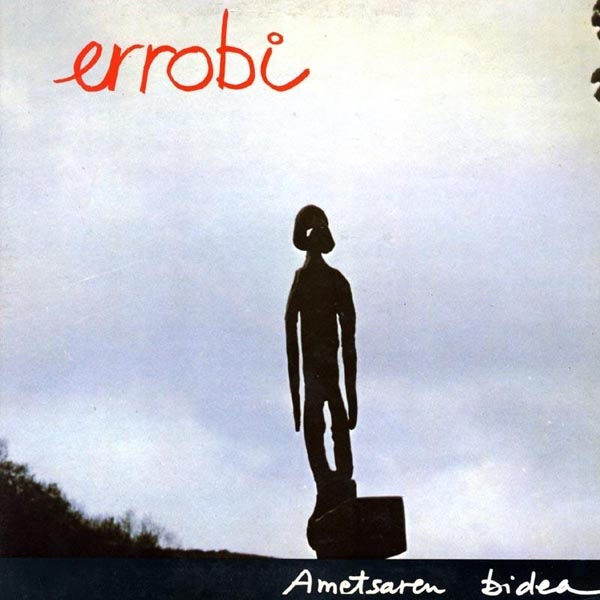 Another among a number of great bands from the Basque region in northern Spain, Errobi produced four albums between 1978 and 1982: Errobi, Gure Lekukotasuna, Ametsaren Bidea, and finally Bizi Bizian, which I believe was their last (someone correct me if there are more [There is a 1985 pop album as well. – ed.]). Originals of these are all fairly obscure, and costly if they can even be found. The most rare and sought after among these was Ametsaren Bidea, it was on my want list for years based only on its strong reputation, and now I can report in all certainty it's a reputation well deserved. Like many of the Basque bands, a strong flavor of folk permeates their music, yet Errobi seem to be more rock than most, at least on this album, which might find some comparison in the eponymous debut by fellow Basque travelers Itoiz. The lineup is bass, drums, and dual guitars – guitarist Mixel Ducau doubles on saxes, while both he and guitarist Anje Duhalde handle the vocals along with drummer Benat Amorena. The album contains four tracks of varying length, from the succinct three minute opener "Alboka," to the sidelong title opus, which flows through many ideas and changes. "Andere" is a lengthy progressive workout with plenty of room for soloing by all, some of the guitar textures might even remind of Alex Lifeson in long-ago earlier times. The closer, "Oraino," focuses on the band's folkier acoustic side, and winds things up nicely. In summary, this is a superb album both in concept and execution, and most would find it very worthwhile; quite possibly Lost Vinyl's best release to date.