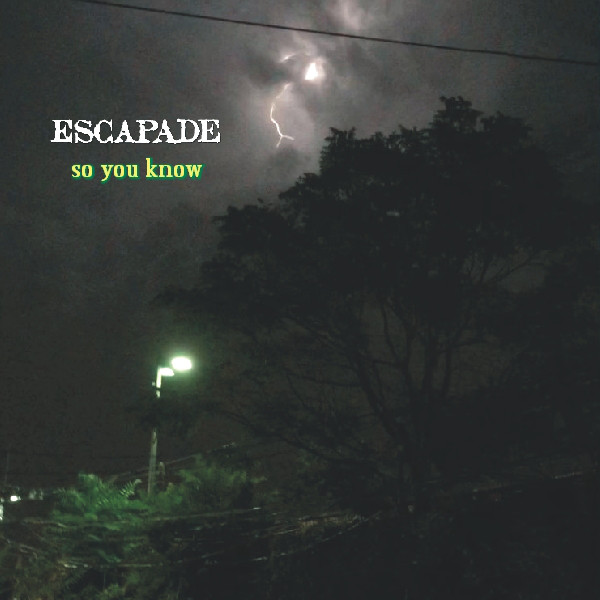 For those just tuning in now, Escapade was a New York based free-psych improvisational heavy stoner rock band that operated from the mid-90s until around 2006, with a rotating cast of musicians centered around drummer Hadley Kahn, guitarist Paul Casanova, bassist Joey Murphy, and Paul Hilzinger on synths, keys, electronics, processing, and just about anything else. Other players were involved as well, other bassists, other guitarists, etc. album and track depending, and overall they released around ten albums from 1996 to until around 2006, and also added tracks to a number of compilations. A fine band that took the jam band ethic of early pioneers like classic Amon Düül II into the 21st century. Nearly all those albums were reviewed in Exposé over the years, but then they just faded away. For anyone that’s never heard them, I would recommend seeking out their releases, especially Remembrance of Things Unknown, Citrus Cloud Cover, Inner Translucence, and my personal favorite, Due to a Faulty Premonition. The CDR at hand, titled So You Know, is a collection of outtakes, rehearsals, and otherwise unreleased recordings from the peak years of 1996 to 2004. Sometimes releases of leftover material can get tedious, but with a band the caliber of Escapade, that has the telepathic thing going on between the members, something like this can be a real treat. And so it is. Two monster cuts from a lost session in May 1997, “Ring Part 4” and “Chemical Soup,” occupy about half of the album’s playing time at 10 and 20 minutes respectively, the latter showing just how intense their jamming can get with plenty of room to stretch out, the former a morphing cyclical piece laced with psychedelic electronics. The remaining seven pieces, ranging from 30 seconds to almost eight minutes are all great slabs of improvs, and don’t let their shorter length make them any less worthy thatn the centerpieces, in fact the crunchy, chaotic and hard driving “No Sleep for You” and “Vice Versa,” a track recorded for the multi-artist compilation CD Tryptaphonic Mind Explosion but never submitted (another Escapade cut “It Gets Banished Forever” was submitted instead) are both solid, powerful and hyper-psychedelic. The album is a huge treat for longtime fans, but a very limited edition.