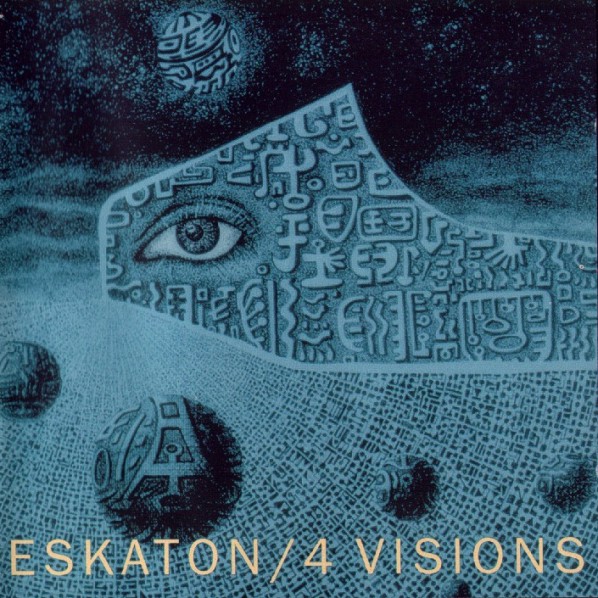 So here's one that I couldn't put down when I first heard it in the early 90s. By this point I had checked out both Ardeur and Fiction and while I loved both, this Eurock cassette struck me as being their most lean and propulsive. Eskaton was probably the most assured of the post-Magma groups, being influenced in a way that was undeniable but also slowly moving forward in the 80s to their own original take on the sound. By that time they had begun to lose some of the energy that was at work on this album. APM reissued it with a great cover and bonus track in the mid 90s and then more recently Soleil Zeuhl with a much inferior cover but more bonus tracks (and a few years later an LP reissue with the better APM cover).

[This review was specifically about the 1995 reissue on the Ad Perpetuam Memoriam label. - ed.]

Finally! After a long wait, the long promised CD reissue of Eskaton's cassette-only release is here. Proving APM may be the finest of the independent progressive labels, the CD is one of the most stunning packages I've seen in a while, with a beautiful new cover, clear jewel box with extra graphics underneath, and a deluxe booklet with pictures, lyrics and discography. You can read about Eskaton's music in the last Exposé, but not mentioned in that article is this CD's nine-minute bonus track called "Le Cri" taken from their unreleased I Care album of equal quality to the rest of the music here. Eskaton's music at that time had moved away from their heavy zeuhl roots into a synth heavy original music that is an evolution of their music from Fiction. This is unequivocally the best reissue this year in my opinion. 4 Visions is a highly recommended classic.

Lana Lane - Garden of the Moon – When one has to crank out fifty or sixty reviews per issue, you pretty much have to be listening to music at every possible opportunity, including hours spent at the so-called day job. Usually it's...  (1999) » Read more

Napoli Centrale - Napoli Centrale – In the vein of bands like Perigeo, Agora, Duello Madre, and Dedalus; Napoli Centrale are an Italian jazz rock outfit playing music quite different from their symphonic contemporaries. They're a...  (1996) » Read more

Yney - Micro Macro – Russian electronic musicians tend to be a bit different from German, British, and American artists. Yney is Russian for "hoarfrost," but their music is far from being cold, crystalline, or...  (2011) » Read more