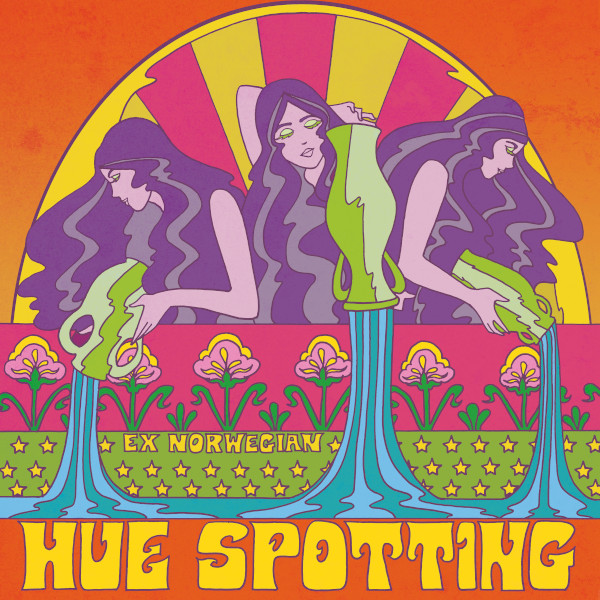 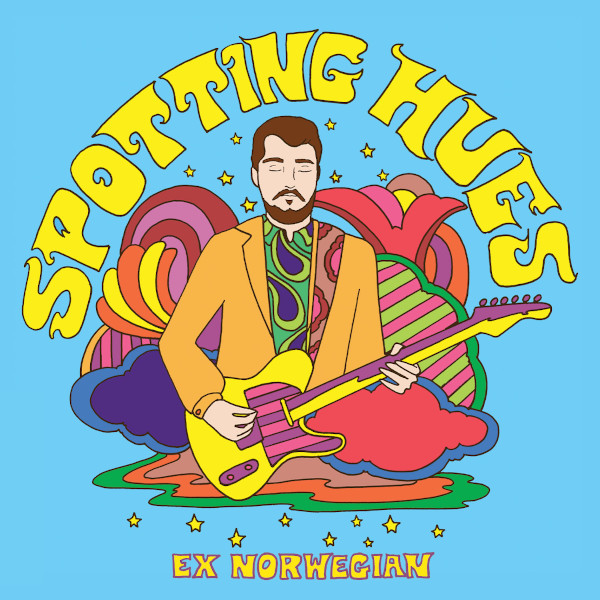 Ex Norwegian is a band that has touched on a number of styles during its more than ten years of existence, and with Hue Spotting, they are in full-on neo-psychedelic mode, presenting a tasty set of ten trippy melodic tunes that pay close attention to the classics of the late 60s while maintaining a fresh sound. Right off the bat, “Fear Backwards” gives us a driving drum beat, twanging guitars, and vocals treated with a phase shift, not to mention Mellotron-like keyboards. There are some more modern keyboard sounds as well, but they don’t detract from the psychedelic mood. The style called power pop that emerged in the 70s could be seen as a development from 60s psychedelic rock, and Ex Norwegian blends the two seamlessly on songs like “Comfort Sands,” which has a charming melody played on a melodica in several sections. Every song is fun, full of great melodies, interesting arrangements, and solid playing. In keeping with the standards of the psychedelic era, there’s even one tune featuring an extended guitar solo, with echoes and wah-wah in evidence. Anyone who enjoys upbeat rock music should enjoy this album even if Nazz and the Strawberry Alarm Clock aren’t on their radar.

As a companion to Hue Spotting, Ex Norwegian also has Spotting Hues, an album full of covers of actual vintage tunes, mostly pretty obscure ones. From the 60s, we get tracks from July, Apple, The Nice, The End, West Coast Pop Art Experimental Band, Billy Nicholls, and Nick Garrie; the 70s are represented by Fairfield Parlour and Gene Clark; and then there’s a version of “Happily Unemployed,” a 1982 song by Gruppo Sportivo that’s done as if it had been from the 60s instead of ska-inflected New Wave. All are worthy, and several may in fact be the first times these songs have ever been covered — it’s not as if there are many people who have heard the source material, let alone learned how to play them. The Nice’s “Cry of Eugene” is especially fun, and certainly has better vocals than the original. On a musical level, this album of covers is every bit as enjoyable as its companion of originals, and could even serve as a jumping of point to explore some super-obscure corners of music history. I’d recommend Hue Spotting as the main dish, with Spotting Hues if you have room for dessert.

On June 5 this year neo-psych band Ex Norwegian released two albums: Hue Spotting containing ten original tunes by Ex Norwegian founder Roger Houdalle and Spotting Hues, a collection of cover tunes from the likes of July, Dr. Strangely Strange, The Nice, etc. If you’ve been following Exposé over the years, you will know that Ex Norwegian is also one of the many bands that regularly appears on Fruits der Mer Records releases. One of the cool things about these two new albums is the Peter Max inspired artwork. The other of course is the music. Hue Spotting sports ten neo-psych pop songs that have roots firmly in the 60s. Trippiness abounds with heavy organ, processed vocals, reversed tapes, and shimmering guitars. Personal favorites include “Bloody Parrots!,” “Your Turn Papers Colour,” and the eight minute “Not Underground.” But where the band really excels is on Spotting Hues with its eleven cover tunes, coherent sound, and taking ownership of the music. The album opens with a cover of July’s “Hallo to Me” that sounds more like The Pretty Things or early The Who. Next is a cover of “Buffalo Billycan” by the obscure band Apple that also resembles The Pretty Things. The third track is a cover Dr. Strangely Strange’s “Jove Was at Home” which also resembles The Pretty Things more than the fae Doctor. The fourth track is “Happily Unemployed,” a cover of the Gruppo Sportivo hit. Then we come to a superb cover of The Nice’s “The Cry of Eugene,” so much so that you aren’t even comparing it to Keith Emerson! The sixth track is a Kaleidosope tune “Baby Stay for the Night,” which made me think of the Jay and the Americans’ hit “Come a Little Bit Closer.” Next in line is a cover of The End’s “Cardboard Watch” followed by a hard rocking cover of The West Coast Pop Art Experimental Band’s “Until the Poorest of People Have Money to Spend.” The ninth track is a cover of another obscure artist, Billy Nicolls, and his pop-psych love song “Girl from New York.” This is followed by a cover of another obscure artist, Nick Garrie, and his trippy psych ballad “The Nightmare of J.B. Stanislas,” which made me think of The Kinks’ “Waterloo Sunset.” And the album closes with a cover of Gene Clark’s “Lady of the North” that brings Ex-Norwegian’s sound back to The Pretty Things and S. F. Sorrow. Considering Spotting Hues, I would not be surprised to learn that this album was inspired by Keith Jones of Fruits de Mer.