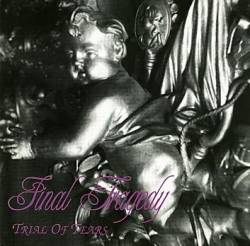 Once upon a time there was a French thrash metal band called Etheric Soul which included among its original members multi-instrumentalist Jean-Luc Millot. Then one day, singer Delphine Cochand appeared to replace the original vocalist and from that moment things went to hell. The band eventually fell apart, leaving only Millot and Cochand to carry on under the new moniker of Final Tragedy. This EP is the result of a year's worth of work and includes four tracks, each running in the 5+ minute range, with Millot covering all keys, guitars and programming while Cochand handles all vocals. The sound has been reformulated into a more melodic and romantic style of goth-prog-metal, with swirling synth washes and arpeggiated guitar over which Cochand spins out her romantic verses, contrasting against all too familiar aggressive metalish forays. While I could wish them well, Final Tragedy have two very major strikes against them: the songwriting and arranging are extremely mediocre and Cochand's singing is nothing less than awful. Plus, the poorly handled drum machine tracks are rather annoying and further accentuate the impression that these two need to spend much more time refining and honing their craft. Lyrics like "Please don't go, 'cause baby I need you near." and "I can feel my body heat/turned on by your beat" aren't going to endear these two to Exposé readers and Cochand's cat-in-heat keening have earned Final Tragedy the top slot on my Worst of '98 list. Consume at your own risk.

Drums & Tuba - Battles Olé – Drums and Tuba has to be one of the oddest bands active these days in terms of their basic instrumentation, which would be, um, drums, tuba, trumpet, trombone, guitar and electronics. The core trio...  (2008) » Read more

Welcome to the Serpentine