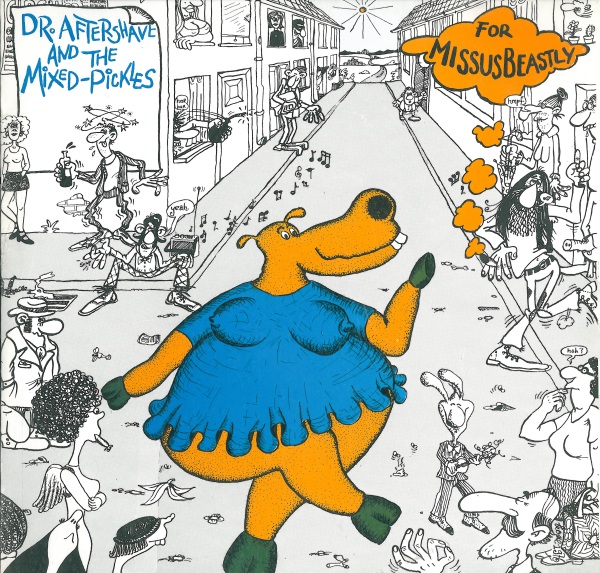 This is Missus Beastly's third studio album, privately released, although at the time the band was still under contract to their former label and producer Dieter Dierks; in order to get around the legal issues, the album cover appears to be by a band called Dr. Aftershave and the Mixed-Pickles, and titled For Missus Beastly. Dierks was probably not amused, but the fans knew this was the real deal. In the two years since the second, self-titled album, a lot had changed: new members had joined on keyboards and drums, joining the two woodwind players and bassist from the previous record. But there are several guest players of note, including guitarist Roman Bunka and Christian Burchard (on vibraphone) from Embryo, among others. It doesn’t take long into the opening track "Miles All along the Watchtower" to realize that the band is still committed to their powerful brand of jazz-rock as they wind their way through this six-minute instrumental mini-epic. The album continues on with more transcendent jazz rock pieces, often changing pace to add variety, bringing different players to the fore as it proceeds – some featuring guest vocalist Maria Archer (also from Embryo). Many of the pieces have an unmistakable 'live in the studio' sound. Other standouts are "Gurus for Sale," an improvisational tour-de-force where Bunka's guitar guys makes a strong appearance, and the ten-minute "Nothing Again" which features Bunka doing some splendid acoustic work in the opening section, followed by alternating sections of intense grooves for sax and electric piano, and more laid back improvisational work. The two bonus tracks are taken from sampler LPs of the "Vloflutho" outdoor festivals in 1976 and 77. All taken, this one is a certified smoker from beginning to end.

Koenjihyakkei - Angherr Shisspa – It’s been amusing to read the attempts of reviewers in the alternative / independent press to write about this album. They find the music so strange that they have difficulty describing it, even...  (2006) » Read more