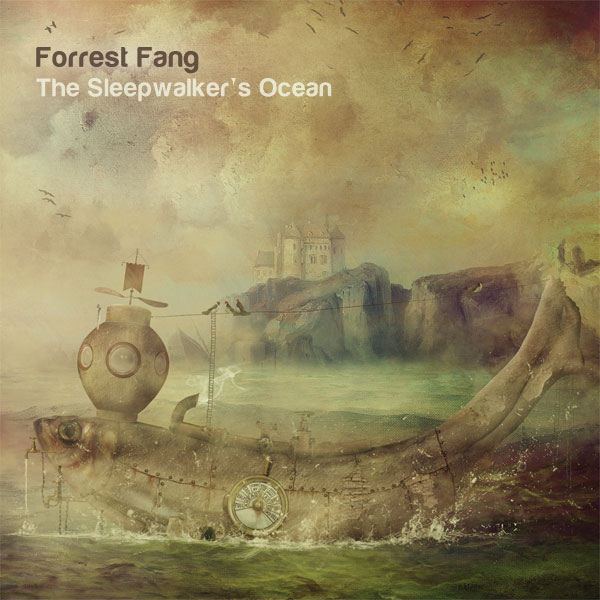 Seems like just yesterday I was listening to, and writing a review of, Forrest Fang’s previous release, Letters from the Farthest Star. Not complaining at all, I enjoy his music and every new release has something new and engaging for the listener, somewhere he hasn’t been before. Unlike so many ambient artists whose stock in trade revolves around synthesizers and electronically treated guitars (and no less to them, every artist uses whatever tools are available and those that are most comfortable to them), Fang’s works employ an array of both electronic and acoustic instrumentation, and such has been the case going back to near the beginning. Here, keyboards and synthesizers mix it up with electric mandolin and guitars, lavta (Turkish lute), violin, flutes, Mexican clay pot (Cantaro), Javanese gamelan, miscellaneous mysterious percussive sounds, sampled voices, and the obscure Marxolin (a 16-string bowed instrument with strings of varying length, perhaps a distant cousin of the autoharp). The opening track on disc one, “Gone to Ground,” sets the scene over the course of around eight minutes, but it’s the second cut, “Message to the Sand,” that introduces many of the acoustic instruments, flutes (by special guest Robert Rich) and gamelan sounds, many heavily processed providing an evaporative wall of sound effect, over which the more defined instrumentation paints rhythms and coloration, all swimming in a vast and mysterious ocean. Often Fang’s music finds a melodic phrase or sonic event that lends itself to repetition, and that brings us to the six-part 33+ minute title track, which evolves over six distinct parts. Each section introduces an idea that comes forth amid a muted dreamlike fantasia, morphing slowly as it moves forward, crossing through a portal into the next section; it’s a piece that the listener can truly get lost within. The “Night Ferry” section in particular is a vivid and haunting melodic dreamlike sequence that moves forward slowly against a muted twilight backdrop. “Waywards,” the title track’s final section, with its criss-crossing melodic patterns, hints of the minimalist composers who are no doubt a big influence on much of Fang’s body of work. "Driftwood” blossoms forward with mysterious muted percussives overlaid on a wash of organically processed acoustic sounds, while “Not Forgotten” closes the first disc with what seem to be the sounds of Tibetan bowls, gongs, and bells, disguised deeply within a cloak of mystery.

Disc two presents a single long-form 54-minute piece titled “An Alternate Ocean (The Salton Sea),” a highly introspective slower-morphing companion to the work found in the title track and other parts of disc one; it breathes and ebbs with vast celestial significance, marked by slow motion on a vast cosmic scale. An alternate ocean indeed. The effect of the two discs together represent a powerful force that moves the listener gently into subconscious realms.