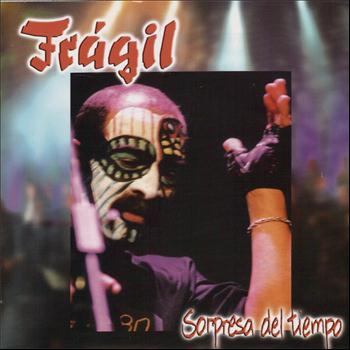 While they are relatively unknown in most of the world, Frágil must be quite popular in their homeland of Peru. Case in point: this live reunion CD from a concert in 1999, recorded with a 28-piece orchestra and an enthusiastic audience. A band with only a small following can’t pull off such a production, especially not with the natural grace shown here. More than half of the material is drawn from the band’s 1981 debut (see review in this issue’s Archive section), with the orchestra filling out the sound nicely. The personnel duplicates that on their first album, with the exception of drummer Jorge Durand, who joined in 1985 for the band’s second album. On several of the songs, it sounds as if the whole audience is singing along, with “Mundo Raro” and “El Caiman” getting the most noticeable treatment. Other than Andrés Dulude’s singing, the musicians don’t step out front much, perhaps due to the structure provided by the orchestral arrangements. Luis Valderrama’s guitar playing is very good, though it’s down a bit in the mix and not flashy; there are several very nice moments when keyboard player Octavio Castillo picks up his flute, such as the lovely instrumental “Lizy.” I’m often reminded of Camel’s Snow Goose and the Renaissance live recordings. It’s very melodic stuff, and I find myself humming the tunes after the CD finishes. And maybe I’m easily amused, but I like having orchestra on a song called “Le Dicen Rock.”