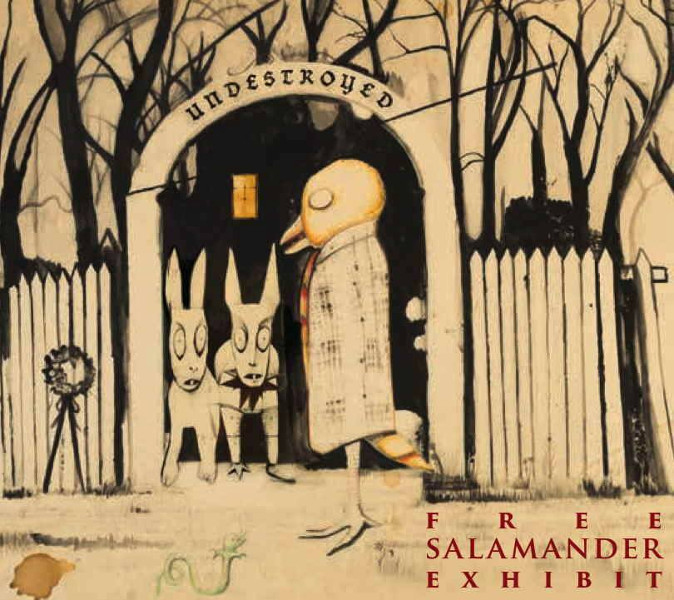 Long-time readers will be aware that Sleepytime Gorilla Museum was the object of near cult-like adoration around the pages of Exposé, and we weren’t alone on that ledge. Their blend of extreme metal with pretty much anything else under the sun and a freaky artistic sensibility found lots of friends among fans of fringy music. Free Salamander Exhibit is the direct descendant of that band, with all four members having at some time or another played with SGM; Nils Frykdahl (guitar, flute, vocals), Dan Rathbun (bass, vocals, constructed instruments), David Shamrock (drums), and Michael Mellender (guitar, brass, vocals) are all alumni, though I’m pretty sure they were never all in the band at the same time. Drew Wheeler (guitar, theremin, vocals) also appears on this album. Stylistically, it’s very much a continuation of the avant-metal pioneered by SGM, with only Carla Kihlstedt’s violin and voice missing from the arrangements. This is music full of unexpected twists and turns — so much so that listeners just have to strap in and enjoy the ride. Crazy new visions lie around every corner, making Undestroyed a kind of sonic thrill ride, like a surreal attraction at a Bizarro World Disneyland designed by a committee consisting of Salvador Dalí, Mike Patton, Frank Zappa, Samuel Beckett, Erik Satie, John Kane, and a rotating cast of extra collaborators. To my ears, the fact that it sounds more or less like another Sleepytime album is no detraction at all. A style this scattered sonically is almost an anti-style, so producing another entry is not repetition. Listeners who hated the drastic mood-shifts of SGM will find no comfort here. This Theater of the Absurd is open for business, and the result is a treat for adventurous explorers.