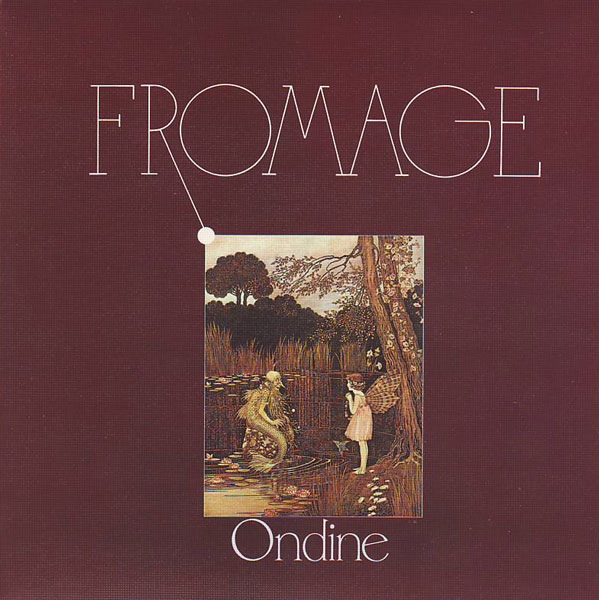 Fromage. That's French for 'cheese.' This Fromage, however, are not French at all, but rather they are a Japanese five piece (g/k/d/b/v+flute) from the '80's. The keyword here is 80s. A very dated sound, typical of a lot of 80s prog. The all-too-nasal and thin vocals (in Japanese) are used in a very standard manner as the band marches seemingly happily through these traditionally-structured pop/prog anthems. The best moments are the extended instrumental passages, where occasionally the writing diverges into a more mellow, jazzy mold. Some nice acoustic/lead guitar work will surprise you amongst all the tired dribble, as on the lead cut "Extermination" and the lengthy symphonic "Ondine," which is by a longshot the album's strongest cut. The style here is formulaic 70s, but it's a welcome refresher compared to the rest of the cuts. At the other end of the scale, there is the following cut, "Color Vision Night," which is obviously inspired by Abacab-era Genesis and uses the pseudo-English chorus "Bye bye bye my love, see you again, and hello my love." Ouch. Belle Antique has certainly done better than this. Fromage. Cheese. Yep.

Cheese jokes aside, this band was active throughout the eighties, and released two regular albums. Their approach was symphonic, featuring guitar, bass, keys, drums and flute, and female vocals, and on their first album, Ondine, they deliver a relatively poppy (and sometimes obnoxiously so) progressive sound, typically Japanese, comparable to bands like Novela in their commercial phase, or perhaps Tai-Phong. Yet on one track at least – the instrumental "Ultimate" – they clearly show that they can deliver the progressive goods without the pop baggage. There are some very nice moments on many of the other tracks as well, especially the lengthy "Tsuki-Ni-Hoeru," but a flash of brilliance here and there a great album doesn't make.

Satoko Fujii Quartet - Zephyros – Maybe it’s meant as a challenge to the listener, maybe not, but pianist Satoko Fujii has placed the most difficult track on her latest quartet offering first in sequence, as if saying, “You made...  (2004) » Read more

Flyin' Ryan Brothers - Blue Marble – The Ryan brothers, Jimmy and Johnny, have been a fixture of the Chicago music scene since the 70s when they were members of competing local bands. In recent years the two have joined forces to bring...  (2006) » Read more

Hoahio - Happy Mail – Have you ever heard Japanese cult band After Dinner? Not another (neo-)prog oriented band from Japan, I reassure you, but one of the most simply beautiful melodic RIO and avant-garde groups from the...  (1998) » Read more