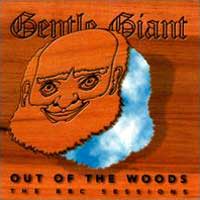 Here is another BBC sessions release on the Band of Joy label, with one unreleased track and several earlier versions of arrangements which became live staples of the band during the group's heyday. "City Hermit" is the only one of three unreleased tracks recovered and included from the band's first session in 1970. It's very much in the same vein as the first album material: heavy organ passages with simple lyrical content. "Way of Life" is a track from the In a Glass House album from 1973 which doesn't hold up well. It is clear the band was having some difficulty in translating some studio material to live performance in this attempt, but it's still quite listenable. Some pretty weird guitar parts from Gary Green in there! An early arrangement of the three-plus song medley from Octopus is revealing in that you can visualize the approach the band (mostly Kerry Minnear, keyboard mastermind/arranger) was utilizing to segue tracks together. Interjected into this entertaining hodgepodge is an engaging acoustic guitar intro for "Boys in the Band" (later dropped in the live version to be replaced by "Acquiring the Taste") and also the recorder trio performing "Yankee Doodle." Most of the remainder of the tracks come from the band's peak creative period: The Power and the Glory and Free Hand, all of which are outstanding slightly alternate versions. Keyboard textures are different than from studio versions too: instrument of choice is different in switching parts from organ to synth, piano to organ etc.; the guitar playing is a bit more aggressive and edgy which was also one of Gary Green's strengths. Sleeve notes are by international fan club president Geir Hasnes, who must be singled out as key researcher/fan of note to try bring this project together. I'd like to shake his hand for perseverance in making it happen, since dealing with the BBC can be such a bureaucratic nightmare especially when trying to appeal to the "tadpole in the ocean" mentality. For the limited audience, it's very rewarding to still be able to appreciate the quirky works of bygone era.

Tungsten 74 - Await Further Instructions – As it turns out, I’ve lately come across a number of CDs that feature a lot of guitar feedback. Luckily, there’s a fair amount of variety in the bunch. Tungsten 74’s take on feedback is an...  (2002) » Read more