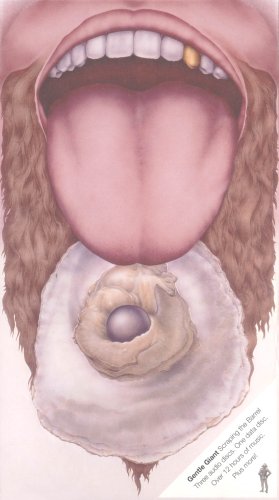 The title of this second volume of Gentle Giant audio and audiovisual archives is simply a long time fan’s obsessive labor of love. Dan Bornemark has been a charter member of the band’s on-line fan club for many years as well as a knowledgeable audio expert with access to extremely rare session outtakes, songwriting snippets, backing tracks, unreleased post band efforts and even 8MM B&W film. Discs one and two are continuations of the band’s Under Construction set that indirectly serves as a high quality proof of concept for this release. The Three Friends and The Power and the Glory recordings provide the most examples to scrutinize. Kerry Minnear’s home demos of piano parts provide enthusiastic insight as to how well developed little bits and pieces were to begin with. Gary Green’s mid-section solo on “Peel the Paint” in fact shows a bit more fluidity than the LP version in my opinion. My favorite takes are alternate version of “Mr. Class and Quality” as well as the angelic swelling vocal part and Mellotron which close out the Three Friends title track. The all instrumental version of “Think of Me with Kindness” is also quite precious. Disc three spotlights radical departure solo efforts by various members. Minnear’s eleven keyboard based songs are in a much traditional singer songwriter mode which fits quite well. Both “Home Again” and “Moog Fugue” would have been good inputs into any Giant recording effort. Plus the childlike introduction into Green and Ray Shulman’s “On Safari” is a bit of modern Duane Eddy that works. Their other two efforts are a bit of 80s modern rock much like The Fixx that is a bit dated but could have materialized into something bigger. Green’s solo guitar pieces are also pretty inspired as well. Disc four is the deep well of a fan’s odds-and-ends wish box: from rare photos of Simon Dupree with Elton John to black-and-white film of a giant walking through a miniature town. Plus some wild band rehearsals, warts and all, are presented in complete form with over eight hours of files to decipher and digest. Live performances from Plymouth and what sounds like a mixing board boot of Torino '73 sound pretty good too. The early instrumental versions of “Just the Same” and “Time to Kill” are powerful as well as the unused vibes arrangement for “On Reflection.” Overall this presents the best of the rest of the material the band has to present and I’m thankful that the archive retrieval process though arduous has been a blessing for devoted fans.