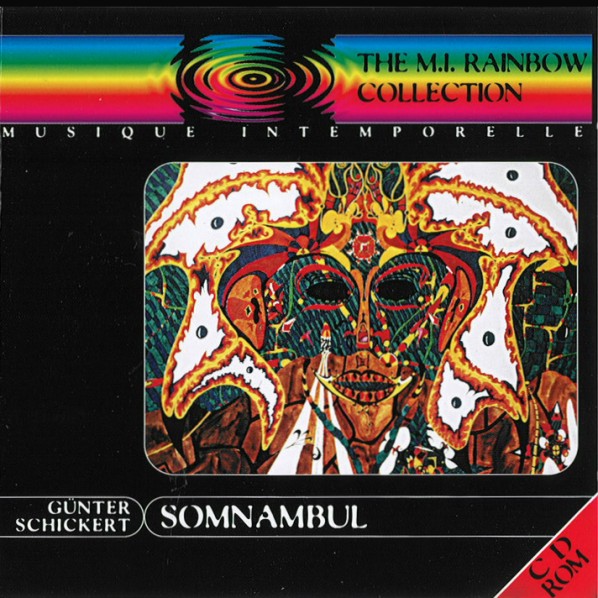 This is one of Musique Intemporelle's Rainbow series, CDs released with a track of CD ROM on each one. I haven't seen the CD ROM portion of this so I can't comment, but the rest of the CD is audio and playable on regular CD players. Somnambul is guitarist Schickert's third solo album (fourth or fifth if you count the GAM and Kinder in der Wildnis cassettes) and is a collection of unreleased material recorded between 1980 and 1994. Schickert's fare is guitar effected "electronic" music, analogous in many ways to Manuel Göttsching but just as innovative and groundbreaking. Schickert's debut (Samtvogel, best known as a reissue on the green Brain label) is certainly excellent – an album of echo guitar music like Göttsching or Achim Reichel yet darker and stranger. It's good to see that Schickert has really never deviated from what he's good at. Even though this spans practically 15 years, the music is still very spacy, very Teutonic, and very good. A variety of tones are used, mostly from guitar and a wide variety of moods are set. In a lot of ways this is quite original for electronic / space music except for one track, "Arabische Nachte," where "sequencer" like guitar line is exactly the same as on Phaedra by Tangerine Dream. Who cares, really – it's great anyway.