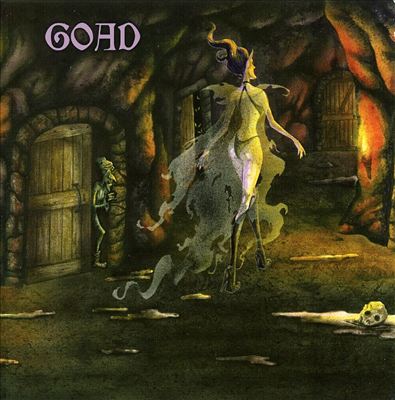 During the last decade several Italian bands which hit the big time in the 70s have got back on track. Some examples are Arti & Mestieri, Museo Rosenbach, and Osanna. Others, on the contrary, had never given up playing but had been condemned to a long oblivion they are coming out of. Goad, the Italian band led by Maurilio Rossi, is a a case in point. A Florence-based guitarist, composer and singer, Rossi is familiar to those who like progressive bands, even though his band is still waiting for the attention it deserves. They started playing in Florence in the early 70s, but Italian prog bands were active otherwhere: Milan, Naples, Rome. But Rossi and his folks never gave up. This CD is a new version of Dark Virgin (2001), a work that had been conceived with Luca Leonello Rimbotti, a journalist with interests ranging from Paganism to the social aspects of heavy metal. The CD includes new material, including two covers (Van der Graaf Generator's "Killer" and King Crimson's "21st Century Schizoid Man") reaffirming a strong prog stance. The Floydian "Steep Path" and the final "Genius of Europe" conjure a whole set of musical ideas and passionate commitment. Goad have always loved dark and gothic athmospheres, as confirmed by CDs devoted to Poe and Lovecraft. Had they been English or American, their success would have been much greater. To some ears this music may sound too deep-rooted in 70s prog and thus unfashionable. It shows, however, some things that should not be overlooked. Not only because progressive rock is gaining more and more fans everywhere, but mostly because it shows that many bands are not going to surrender. Year after year, decade after decade, they keep on playing the kind of music they like without taking care of charts, selling and all the like. Due to this they deserve our admiration and respect. Maybe they would be better off better singing in Italian, but this is a minor sin. Maybe the time has come for Goad to gain wider audience: they deserve it more than many other progsters.

Dragonwyck - Dragonwyck – In case you're wondering, Dragonwyck is the title of a 1944 historical romance by Anya Seton, made into a movie starring Gene Tierney and Vincent Price. This Dragonwyck, on the other hand, was a psych...  (2007) » Read more

Theme for an Imaginary... Train Spotter?