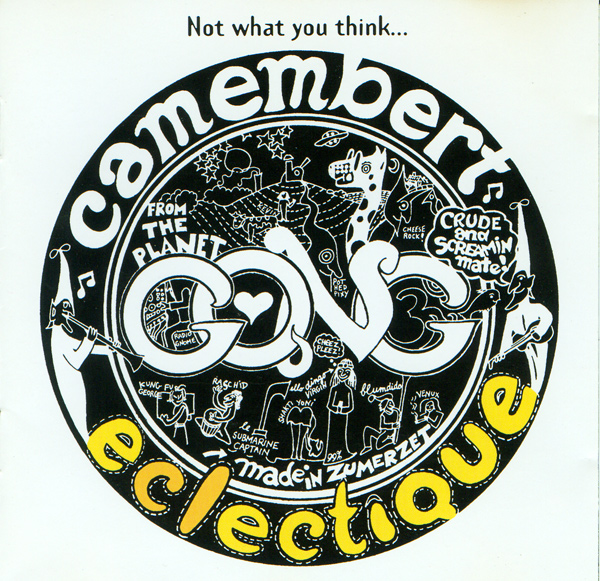 Seminal French space prog band Gong may be best known for their pioneering work in the early to mid 70s, as evidenced by the indispensable Radio Gnome Trilogy of albums: Flying Teapot, Angels Egg, and the space fusion masterpiece You. These albums helped launch the admirable solo careers of Steve Hillage, Daevid Allen, and (to a lesser extent) Tim Blake and Mike Howlett. The pivotal album which preceded this trilogy was wittily titled Camembert Electrique; however, material recorded prior to this album has been largely unavailable outside of haphazard compilations (The History and Mystery of the Planet Gong) and patchwork albums (Magic Brother). Now a new chapter has been added to the early Gong archives. Because it is titled Camembert Eclectique, and has cover art almost identical to the aforementioned similarly titled album, the cover bears the caption "not what you think..." One listen to this CD, released by GAS (Gong Appreciation Society) records, reinforces the notion that this CD is quite different from what we usually expect from Gong. The cast features Daevid Allen, Gilli Smyth, Didier Malherbe, Christian Tritsch, and a variety of lesser known players. Although a few of the pieces are well known to Gong fanatics ("Dynamite/I Am Your Animal," "Time of Your Life," and "Garcon Ou Fille" — later titled "Est Que Je Suis"), many are previously unheard cuts. Most notable among these is the 13 minute "Hauted Chateau Rehearsals," which attempts to recreate in the studio an approximation of their live show at the time. Spooky spoken parts give way to fiery guitar solos, adding a valuable asset to the Gong canon. Allen was heavily into tape loop experiments as well, and one of his first and best efforts is included here, "Gongwash Indelible." It's subtle, but very effective upon close listening. The aforementioned "Dynamite" appears in two versions, each one decidedly rawer and more sinister than later versions. Those who have heard the late 70s album About Time (under the name New York Gong) will recognize the bouncy "Big City Energy," which later became "Jungle Window" for that album. In all, this CD is packed with many crucial additions to the Gong fanatics collection. But is it indispensable? Probably not, since the sound quality is sub-par, and while this sometimes adds a bit of charm and mystery to the proceedings, it may detract from the audiophile's listening experience. If you're not already a Gong fan, you ought to proceed with caution before buying this disc. Certainly it's not Gong at their best (for that, refer to the Radio Gnome Trilogy mentioned above). To its credit though, this may be the best example of early Gong yet released. This album is to Gong what Inedits is to Magma: a raw collection of out-takes and jams, revealing interesting new sides to a well-known band. For a bootleg-type collection of odds and ends, you could do a lot worse than get this CD.