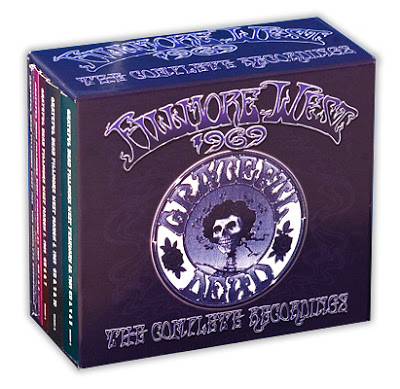 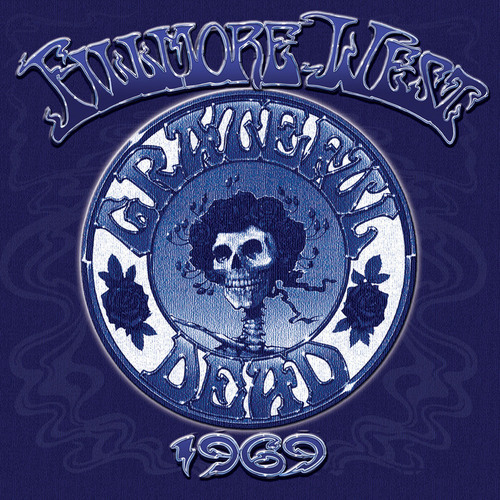 OK, here's one of the few items I'll be covering that I don't actually own a copy of. Some years back when the Grateful Dead vault keepers were finishing up the Dicks Picks series, the band began to start releasing box sets that tend to come out once a year in the later summer. Not knowing what the demand would be, management severely underestimated how popular releasing Fillmore West 1969: The Complete Recordings would be. This series of four gigs is largely the source material for the band's first album Live/Dead and are among the band's very best live shows. They placed I believe 10,000 copies as a limited edition and the preorders sold out overnight even before I could place an order. A few weeks later I was very very lucky when the band announced that they still had some copies left after cancellations and knowing it would end up a collectors item, I leapt at the chance. The box now goes for five times its original worth and for good reason. Fillmore West 1969 is essentially the distilled 3CD version from these four shows and the selections are well chosen indeed, featuring most if not all of the true highlights from the stints and especially leaving out their horrendous covers of "Hey Jude." 1969 Dead isn't always good, but these shows are easily the best of the year.

Discs 3-5 of the Complete Recordings comprises the show from February 28. By this point the Dead were really stretching out in 45-60 minute chunks. There are three suites on the last two discs and you can check off all their great stuff on it, "The Other One / Cryptical Envelopment," "Dark Star," "St. Stephen," "The Eleven," "Alligator," "Caution," etc. I've heard a lot of '69 material and while there's some great shows, there are few that have the atmosphere and chemistry these display — to me this is like Coltrane at the Village Vanguard, Man at the Padget Rooms in Penarth, Zappa at the Roxy, or Miles nearly anywhere in 1970. In fact, I was reminded of Miles Davis's quote about there not being wrong notes in one moment on "Eleven" when Jerry is going for it, he hits something off key and then flawlessly without a misstep creates an entire phrase that completely makes sense of what could have been a snuff, no thinking involved, the music playing without a head behind it, group improvisation at an almost telepathic level. To this day I still feel extremely lucky to have had the opportunity to grab this set when I did as it was at a time when the company badly underestimate the demand for these shows, even if they were nearly all in circulation at the time.

Discs 6-7 are from March 1. All four of the shows in this box set are terrific, but my favorite by a slight lead is this March 1 recording, probably because it was the first I heard (since it was already well circulated in trading circles). The set draws heavily from their brilliant Anthem of the Sun album which was released the year before and as always what the Dead do with this material live is far beyond what they could do in the studio. This is the one with the "Dark Star > St. Stephen > The Eleven > Turn on Your Lovelight" suite that did not end up on Live/Dead (in fact I don't think any of this show showed up on that album) and so is better represented on the preciously mentioned Fillmore West 1969 set. But as great as it is do yourself and favor and shut it off before the "Hey Jude" encore. Anyway I do hope archive.org has a copy of this as the box set goes for about $500 at a minimum now.

33 Dao - Xunzhao Guowang – There has always been a kind of surreal appeal to the sound of carnival music, and it has managed to creep into a variety of genres, from Broadway musicals to Hamster Theatre. This Shanghai band (No....  (2009) » Read more