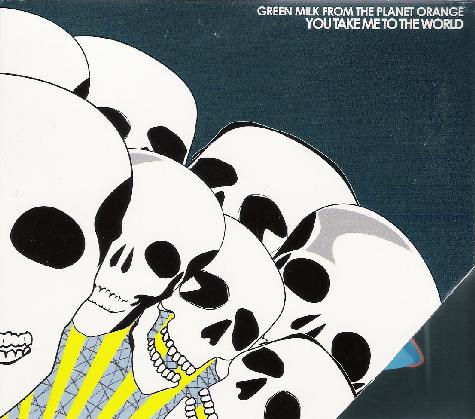 Read the credits: “All songs improvised by GMFTPO” and (especially if you’re familiar with their other recordings) you know you’re in for a trip. A strange and disturbing trip. There are only two tracks, and the first, “Killmekillmekillme,” features a lot of wandering rhythmless sound with crazed vocalizations. Eventually there is a disjointed beat to it, but I’m still not keen on the tortured vocals. “Away” starts in a similar mold, though without the screaming, and eventually develops a beat – call it hypnotic or soporific depending on your mood. About halfway through the 24 minutes it drops down to space noises (from the guitar and bass I suppose) and spoken Japanese (an assumption – it could be gibberish, but it sounds kind of like Japanese). The intensity of both the voice and the noises increases over the course of several minutes before just petering out. Then a rhythmic pattern sneaks in from oblivion and develops into the best eight and a half minutes of the set. The climax is a wild freeform wah-wah guitar solo over a driving, thrashing beat, and it’s marred only slightly by their inability to work away from a single note in the bass. If the whole thing was like this, it would find its way into the player much more often. As it is, I’m tempted to break out the editing software and make a Good Parts Version.

Azigza - Kriya – Combining influences from around the world can be a dangerous enterprise for musicians. There will always be some who call foul at the “appropriation” of sounds from other cultures, preferring...  (2004) » Read more