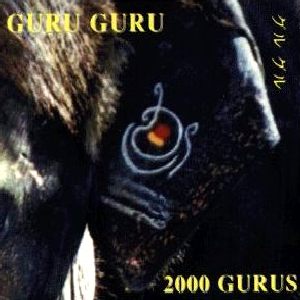 I remember Guru Guru from back in the 70s, when I picked up one album on a whim. It was spacey, funky jazz rock done with a sense of humor (I don’t suppose you can be too serious with a name like Guru Guru). I know the band has been through many stylistic phases, but that’s the one I know. This newest CD is very much the modern outgrowth of that sound, taking percussive grooves and building world-inspired jams on top of them. Mani Neumeier’s drums and percussion are augmented by loops and samples; Peter Kühmstedt’s bass sets a funky agenda; guitars by Roland Schaeffer, Luigi Archetti, and guest Hans Reffert contribute infectious rhythms, creative solos, and interesting effects; Schaeffer also plays a variety of other instruments. Vocals, both spoken and sung, are often just coloration, rather than delineating primary melodies in what you’d call “songs.” On the whole, 2000 Gurus is a funky excursion into world beat fusion that probably shouldn’t work, coming as it does from a group of Europeans. But they approach the material with a mixture of respect and humor that somehow comes off extremely well, and should be highly listenable both for fans of space jam rock and world music. And the grooves are catchy enough to attract adventurous electronica adherents. Too bad they couldn’t put the interior illustration on the outside: it shows an elaborate stone temple (Angkor Wat, maybe) with the starship Enterprise cruising overhead. It sums up the style nicely, but I suppose it could lead to a lawsuit.

Silver Apples - Silver Apples / Contact – Frankly, this is one of those reissues I thought I would never see. The (now long defunct) Kapp label issued these two albums in the late 60s, after which they quickly faded into obscurity. At a time...  (1994) » Read more